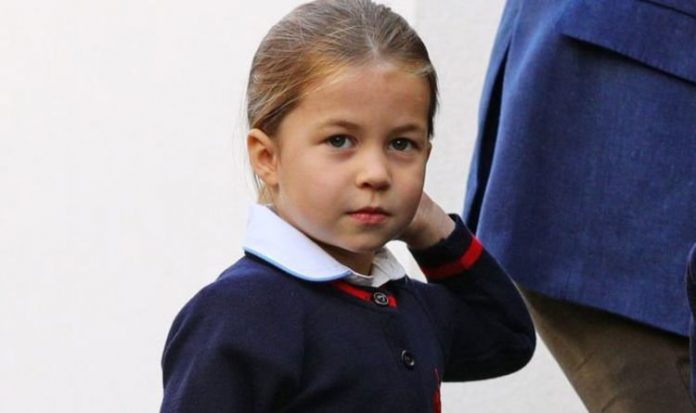 Princess Charlotte is in spitting distance of claiming the throne, now fourth behind her brother, Prince George. A rule change before her birth allowed her to retain her position when her younger brother, Prince Louis, arrived, as he would have previously had priority for the throne. Although the new rule has altered her place, she still has to abide by a set of older ones.

Prince William and Kate, Duchess of Cambridge, have taken a hands-on approach to parenting.

But like all royal couples, they have also enlisted an extra pair of hands in a nanny.

Theirs is Norland College alumni Maria Borrallo, who has worked with the family since 2014.

She joined to help raise an eight-month-old Prince George and has remained to aid the Cambridge family with Louis and Charlotte.

Part of this involves laying down the law for their wards, meaning the royal tots have to follow a strict regime.

Speaking to Fabulous Online, Louise Heren, a Norland expert and author of Nanny in a Book, Princess Charlotte and her siblings have to abide by her rules.

She told the publication Ms Borrallo reins the children in to stop the children pulling focus from their parents.

Ms Heren said: “There will be lots and lots of outdoor play, that’s the one thing you could say Norland are old-fashioned about.

“Loads of fresh air. Lots of bike rides, playing with their dogs, potentially some gardening. Norland are very into teaching children through play.

“Yes you are getting mucky with your hands in the soil, but you are learning how to plant.

“If it is tipping it down, they will still go out. Wet weather is just inappropriate clothing, you have to put the right stuff on.”

Ms Heren added while a lot of the teaching seems “old fashioned” focus, it isn’t necessarily.

She said: “It doesn’t have to be strict. Just because Norland Nannies wear the brown uniform, they look quite old-fashioned, that doesn’t mean their message is old-fashioned. It’s no-nonsense.”

The coronavirus pandemic changed the Cambridge childcare situation slightly, as children had to stay put at home.

Both Princess Charlotte and Prince George returned to class on September 7, after months of homeschooling.

Prince William joked it had taken a “long five months”, adding he said most parents would find themselves “breathing a sigh of relief” as schools reopen.