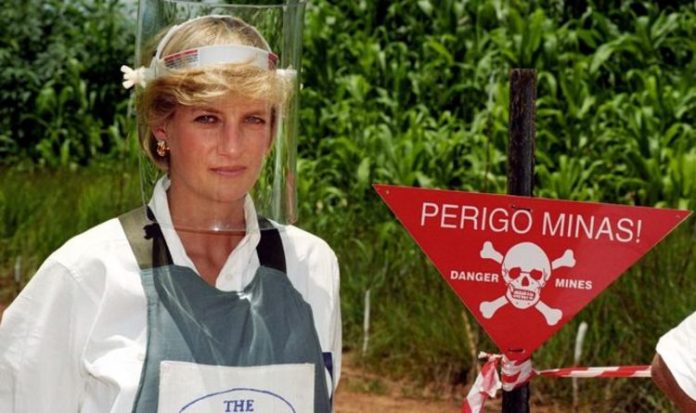 Delighted by the reception to her first trip to highlight the menace of leftover mines, she wanted to visit Vietnam, Cambodia and Kuwait. The newly divorced royal stoked controversy in January 1997 with her high-profile solo engagement in the war-torn African state. But coverage of her walking through a minefield in Huambo in helmet, visor and flak jacket immediately became among the most iconic images of her.

The intervention is credited with raising awareness of horrific injuries mines still cause in peacetime.

Diana died in a car crash seven months later, aged 36, so did not live to see her work pay off with an international treaty to ban landmines.

Documents released by the National Archives in Kew, south-west London show she was already planning the next step in her crusade.

He said: “The British Red Cross were pleased and so was the Princess of Wales. It was the first overseas trip that she has undertaken since agreeing to support the mine ban.”

Mr Hart added she was “talking about following it up with visits to other heavily mined countries such as Vietnam, Cambodia and Kuwait”.

The trip was controversial because John Major’s government was seen to lack enthusiasm for the campaign.

He added Red Cross chief Mike Whitlam called it a “bit of mischief” and added: “The Princess herself described it as an unnecessary ‘distraction’.”

Diana also spent time in Luanda and the city of Kuito, met landmine victims and visited a workshop where artificial limbs were made.

“Patients recovering from mine disasters were visited at health centres and she was also briefed on mine awareness activities. In Huambo, after walking through a minefield she detonated a mine under the close supervision of the highly impressive British NGO, Halo Trust,” added Mr Hart.

Diana met Angolan president Jose Eduardo dos Santos and was believed to be the first British royal to visit the nation, drawing “world-wide attention to the evils of mines and the tremendous human suffering that they cause”.

Mr Hart concluded: “An excellent visit in terms both of the Princess’ and Red Cross objectives and of the bilateral relationship. It was well worthwhile. Our local profile is at present sky high.”

Some 22 years after Diana’s mine walk, son Prince Harry visited the site which had been converted into a thriving residential neighbourhood.

Full details on this year’s Kew Records can be found at nationalarchives.gov.uk