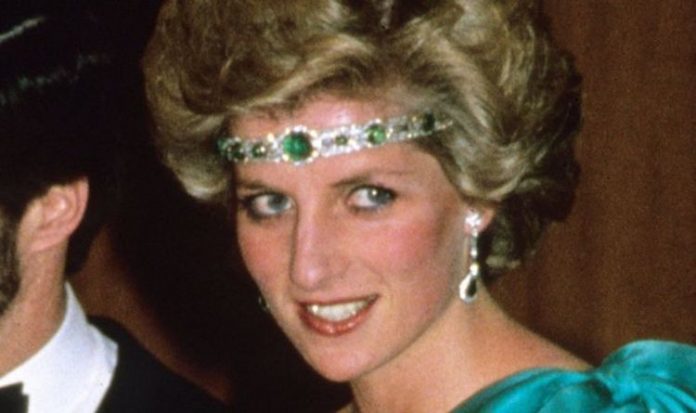 Princess Diana and the Queen saw their relationship slowly collapse as the marriage between the Prince and Princess of Wales broke down. But even before Diana tested royal conventions speaking openly about her love life, she still managed to spark Her Majesty’s “irritation” with her penchant to modify royal jewels to suit her outfit. Particularly divisive was Diana’s choice to misuse a special family heirloom as a headpiece rather than a necklace.

Commentator Debora Attanasio told Marie Claire Italia experts had been baffled when the Princess of Wales appeared wearing the piece during a dinner in Melbourne in 1985.

Ms Attanasio said: “Diana showed up for the ball wearing a tiara that at first baffled royal experts until they recognized it.

“What Diana was wearing while dancing around in her husband’s arms was actually a necklace that was part of the Crown Jewels that she had been given by Queen Elizabeth herself.”

The Art Deco Emerald choker had been part of the inheritance the Queen’s grandmother, Queen Mary, left her when she died in 1953.

The piece, now part of the Crown Jewels, had been commissioned after the Ladies of India presented Mary with a set of stunning emeralds she later had set into the necklace by Garrard in 1921.

Despite the Queen having shown her appreciation for her grandmother’s jewels through the years, the choker remained unused until she decided to pass it on to Diana upon her wedding to Prince Charles in 1981.

Ms Attanasion continued: “It was a piece that the Queen was very fond of, but which she, in turn, decided to pass on to Diana as a wedding gift.

“According to sources close to the Queen, having seen what Diana had done with it, Her Majesty became very irritated.”

The royal author claimed Diana has said “my honker’s too big”  and was advised to leave it there from Canadian diplomat Victor Chapman.

The choker became a prominent role in Diana’s outfit, pairing it on several occasions with the Spencer Tiara.

The Princess of Wales was last pictured wearing the impressive necklace on her 36th birthday at the Tate Gallery shortly before her death in 1997.

The piece later returned to the Queen’s collection and has been exhibited on several occasions over the years.