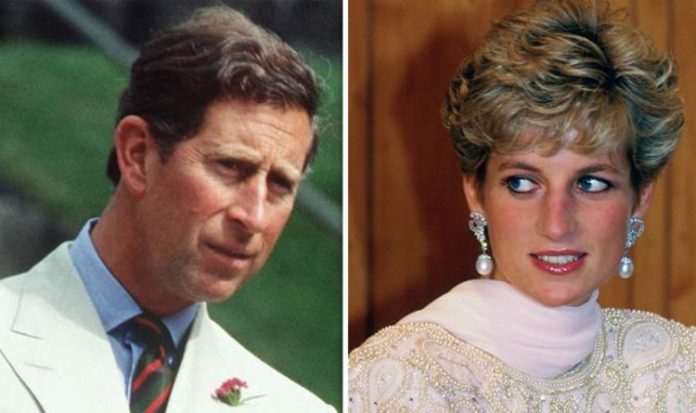 Diana and Charles were infamously mismatched. Their 13-year age gap and completely different personalities meant they clashed regularly behind the Palace doors. Their years of marital conflict left them both miserable and they separated in 1992 — but Diana then tried to win her husband back through seduction. Howard Hodgson’s 2007 book, ‘Charles: The Man who will be King’, explains how the Princess of Wales regretted the division between them.

He wrote: “Slowly Diana came to understand that she had finally really burned her bridges with Charles, and even though there were days when she would tell friends that she hated him, the thought of him rejecting her made her want him back.

“The one man whom she had always wanted to possess had finally turned his back on her, given up trying to make his marriage work and no one could help her get him back again.”

Mr Hodgson is referring to Charles’ decision to start a romantic relationship with his former flame Camilla Parker Bowles, having realised his marriage with Diana had failed and that she was supposedly having affairs, too.

Yet, she “hadn’t given up trying” to win back the Prince of Wales.

Reportedly, when the “tantrums” did not work, DIana tried “seduction” instead.

The Princess of Wales later told royal author Lady Colin Campbell about her plan of action — and how it failed.

She explained: “I went into his dressing room.

“I am wearing this fabulous eau-de-Nil silk nightdress, low-cut and slinky.

READ MORE: Why Princess Diana always suspected Harry would move to US

Mr Hodgson said that while it is not clear if the story is true, it does reflect the “completely different nature of their characters”.

Charles had “mentally left home”, according to the biographer, and stepped back from the marriage while holding it together in public.

Mr Hodgson added that Diana, on the other hand, was hoping her charm would work in her favour.

However, after this failure, Diana allegedly attempted to get the Queen to intervene with her marriage.

Yet, the monarch refused to get involved.

Diana then tried to prevent Camilla from seeing Charles instead.

She approached her husband’s mistress at a party, and confronted her over their affair.

Diana told Camilla that she knew of their affair, and wanted her husband back.

Camilla allegedly replied: “You’ve got everything you ever wanted.

“You’ve got all the men in the world falling in love with you, you’ve got two beautiful children, what more do you want?”

Diana recalled this conversation during interviews secretly conducted in Kensington Palace in 1991.

Yet, Camilla and Charles continued their relationship after both of them got divorced.

They wed in 2005 and Camilla is expected to take the title of princess consort when Charles takes to the throne.