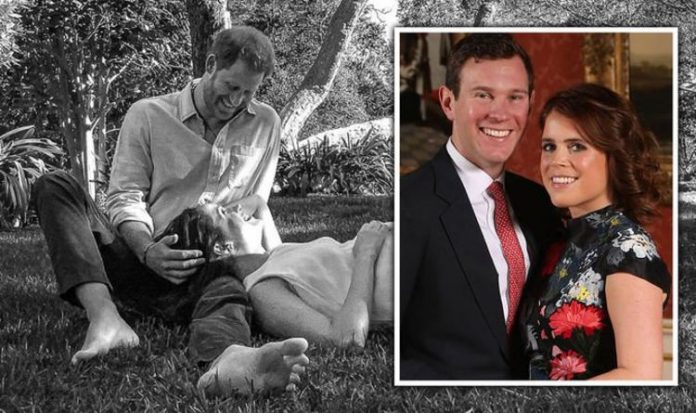 This means senior royals such as Prince Edward, who until early last week was 11th, and Princess Anne, who was 15th, were knocked down a position in the line to the throne.

However, the happy announcement made yesterday evening by Harry and Meghan means it is now Eugenie and her son’s turn to be pushed down the line.

Meghan and Harry’s new baby will follow Archie Harrison in the line to the throne and, after its birth, will become eight in line.

As a consequence, everyone following the Sussex children in line to the throne will lose a position.

Prince Andrew is currently eighth in line, followed by his daughters Beatrice and Eugenie.

Eugenie gave birth to her son on Tuesday at London’s Portland Hospital – where her mother Sarah Ferguson also delivered both her own children.

The happy news was shared by Eugenie on Instagram, who published a sweet black and white picture showing her son’s hand being held by his two proud parents.

Eugenie revealed the sex of the baby in a rather unconventional way for a royal – using a series of blue heart emojis.

Buckingham Palace also issued an official statement confirming the birth of Jack and Eugenie’s son – the name of whom is yet to be revealed.

The palace’s message read: “The Queen, The Duke of Edinburgh, The Duke of York, Sarah, Duchess of York, and Mr and Mrs George Brooksbank have been informed and are delighted with the news.

Eugenie and Jack were spotted leaving by car Portland Hospital with their son on Friday.

Eugenie and Jack first announced they were expecting a baby in late September last year with a touching Instagram post which included a picture of the couple smiling and the pair holding a pair of baby slippers.

Meghan and Harry also accompanied the announcement of their second pregnancy with a picture.

The Duke and Duchess of Sussex, who opened up about the arrival of their second baby on Valentine’s Day, shared a black and white photograph by Misan Harriman showing Prince Harry sitting on the grass while Meghan smiles at him with her head on his lap.

Upon sharing the news, a spokesperson for the Sussexes said: “We can confirm that Archie is going to be a big brother.

The Sussexes did not share when the baby is expected.

This happy news comes only a few months after the Duchess opened up about suffering from a miscarriage in July last year.

In an essay published by The New York Times, Meghan described the physical and emotional pain of her miscarriage.

Following the publication of her story in autumn, the Duchess was praised by social media users and baby loss charity alike for helping to break down the stigma surrounding this tragic experience.