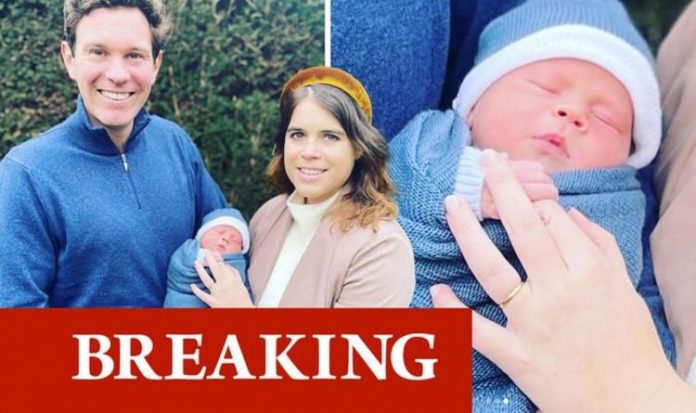 In a touching tribute, Buckingham Palace released a picture of the pair with their newborn child. August was born on February 9 at 8.55am in the exclusive Portland Hospital. He is the ninth great-grandchild of the Duke of Edinburgh and the Queen.

August is also the 11th in line to the throne and was named in a touching tribute after Philip who was admitted to King Edward VII’s hospital on Tuesday.

In a post on her Instagram page, Eugenie said: “We wanted to introduce you to August Philip Hawke Brooksbank.

⁣”Thank you for so many wonderful messages.

“Our hearts are full of love for this little human, words can’t express.

“We are excited to be able to share these photos with you.⁣

“Thank you to the wonderful essential workers including our midwife who came to discharge our boy.”

Following the release of the picture, the Queen and Philip was also said to express their happiness over the name of the child.

JUST IN: Royal Family LIVE: Meghan and Harry warned ‘no way back for them’

A tweet from the official Royal Family account read: “The couple have been touched by the well wishes they have received on the birth of their first child,
and are delighted to share this first photo as a family.”

Augusts will use a His Royal Highness prefix or have a title despite his mother being a princess.

This is due to him being born through a female line of the Royal Family and will be a regular Master Brooksbank.

He will also move down the line of succession if Cambridge and Sussex children have families of their own in the future.