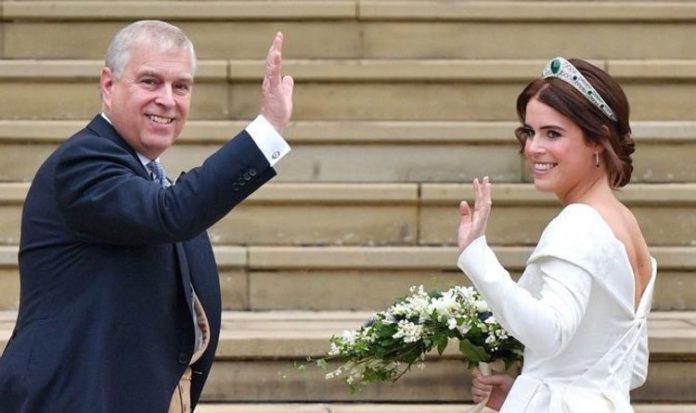 The couple announced the happy news on Instagram on Tuesday, showing a black and white photo of the child’s hand wrapped around his mother’s finger. The Princess gave birth to a baby boy at the private Portland Hospital in Central London, where most royal births take place.

Her grandmother, the Queen, 94, was said to be “delighted” with the news.

Buckingham Palace said in a statement: “Her Royal Highness Princess Eugenie was safely delivered of a son today, 9th February 2021, at 0855hrs at The Portland Hospital. Jack Brooksbank was present.

“The Queen, the Duke of Edinburgh, the Duke of York, Sarah, Duchess of York, and Mr and Mrs George Brooksbank have been informed and are delighted with the news.”

Princess Eugenie, 30, broke the news prior to Buckingham Palace demonstrating how the royal couple have decided to take control of their own narrative outside of the royal bubble.

The pair pulled a similar move with the announcement of the pregnancy in 2020, also choosing to announce the news on Instagram.

Even though Eugenie is a ‘blood-born’ princess, she has followed in the likes of the Sussexes and Zara Tindall in shunning classic royal communications methods.

The move is a shun to her father, Prince Andrew, who has been insistent over the years that his daughters live their lives as frontline royals – something both Eugenie and her older sister Princess Beatrice have rejected, as well as his brother Prince Charles.

Prince Andrew has frequently lobbied the powers that be in the Royal Family to make his daughters frontline members of the family – which has been rejected by Prince Charles.

“It’s arguably easier to control the narrative that way.”

“Maybe it’s just easier that they do it this way. She doesn’t want to embarrass their father.

“But, traditionally, there are rarely photographs of royal newborns with their grandparents.

“That comes when the official christening photographs are taken.

“Family never really get involved at this stage.

“Although there was a photograph of Archie with Meghan’s mother Doria, the Queen and Prince Philip, that was quite a rare thing.”