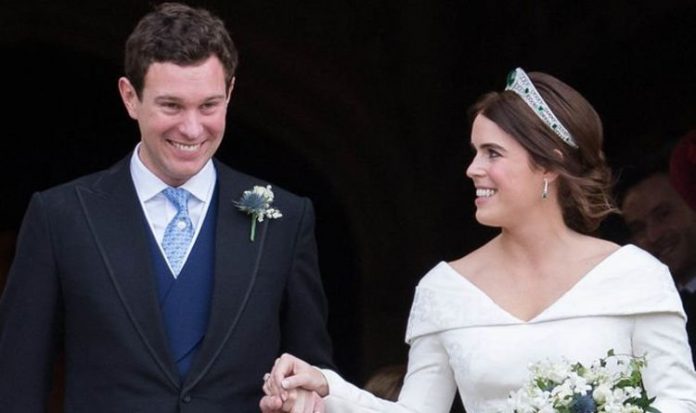 Princess Eugenie and husband Jack Brooksbank announced the arrival of their first child, a baby boy on February 9. The couple’s happy royal baby announcement was shared by Buckingham Palace and the new family were seen leaving the Portland Hospital in London on Friday. But what name have the couple decided to give their son?

Princess Eugenie gave birth to a son at 8.55am on Tuesday, February 9, at The Portland Hospital in central London according to Buckingham Palace.

The announcement reads: “Her Royal Highness Princess Eugenie was safely delivered of a son today, 9th February 2021, at 0855hrs at The Portland Hospital. Jack Brooksbank was present.

The new baby boy is the Queen and Prince Philip’s ninth great-grandchild, replacing Archie Harrison Mountbatten-Windsor as the youngest great-grandchild in the Royal Family.

He will be 11th in line to the throne, pushing Prince Edward down to 12th place.

The Earl of Wessex’s children James, Viscount Severn and Lady Louise will move down to 13th and 14th, respectively.

Baby Brooksbank will be a second cousin to the child of Peter Phillips, Zara Tindall, Prince William and Prince Harry.

Sarah Ferguson, the Duchess of York, was quick to share her delight at the news.

She said following the announcement: “I am so excited by the news that Eugenie and Jack are expecting their first child.

Social media users have been making their own guesses at what the new Baby Brooksbank will be called.

On Twitter, one person wrote: “Baby Brooksbank, congratulations to Princess Eugenie and Jack. My name guess is Theodore/Theo, what’s yours?”

Another person tweeted: “I’m secretly hoping they’ll use Philip as one of the names as it’s Prince Philip’s 100th birthday this year in June and it’d be so cute, his great-grandson born 100 years after him”.