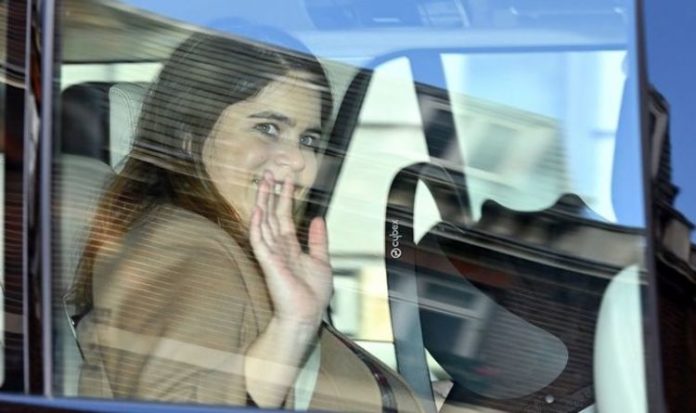 The 30-year-old gave birth to her first child with Jack Brooksbank on Tuesday. The new mother wore a beautiful tartan dress paired with a caramel coat as she left the hospital – and her hair effortlessly loose.

Mr Brooksbank drove the family of three away from the London hospital in a historic moment.

But royal fans have been quick to notice this is not the first time Princess Eugenie has worn her trusted tartan frock, according to Hello!

In December, the royal was seen wearing the same dress during a Christmas video message for her Anti-Slavery Collective.

In the Christmas video message, the pair both thanked supporters during a “particularly tough year”.

Princess Eugenie said: “Jules and I just wanted to take the time to thank everyone who supported the Anti-Slavery-Collective but also to reflect a bit on our year and how wonderful it’s been even in a very difficult time.

“We’ve managed to speak to many NGOs and different people who have told us about the incredible work that is still continuing to fight modern slavery.”

In a statement, the Palace said: “Her Royal Highness Princess Eugenie was safely delivered of a son today, February 9, 2021, at 8.55am at The Portland Hospital.

Princess Eugenie posted the first picture of the new royal baby on Instagram.

The picture appears to show a close up of the new parents holding their son’s hand.

Royal fans praised the couple for the arrival of their new son.

One Instagram user wrote: “Ahhh welcome to the world little one!! Congratulations to the happy couple.”

While another said: “Huge congratulations! Welcome to another baby boy in the family.”