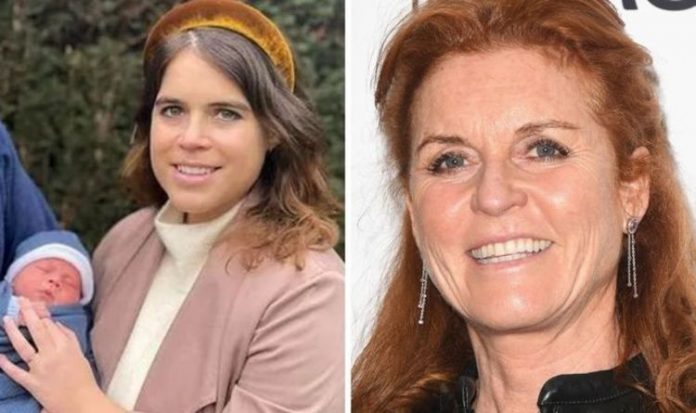 August, who was born on February 9, is Eugenie and husband Jack Brooksbank’s first child together, and the Queen’s ninth great-grandchild. In a heartwarming post on Instagram, Eugenie showed off August, before thanking the public for their “many wonderful messages”, adding: “Our hearts are full of love for this little human, words can’t express. We are excited to be able to share these photos with you.⁣” Among the well-wishers was Eugenie’s mother, the Duchess of York, affectionately known as Fergie, who called for kindness and a “smile” towards her first grandson.

Eugenie and her sister Beatrice’s bond with Fergie has been clear throughout their lives, and the pair have been vocal about the influence she has had on them since a young age.

And Beatrice revealed a motto that Fergie had handed down to them, that Eugenie could maintain in August’s upbringing, that was originally given to the Duchess by her grandmother Doreen Wingfield.

Speaking to Hello! three years ago, Beatrice detailed how despite the stresses of being part of the Royal Family, Fergie would always maintain a positive attitude.

She said that the family had “been through some incredibly stressful times together” but “every single minute” Fergie “created joy”.

Princess Eugenie could bring up baby August on motto handed down by Sarah Ferguson (Image: GETTY/INSTAGRAM)

Beatrice explained how she is “so lucky that I get to lean on her every single day”, adding: “I’m inspired by her ability to give, even when she’s going through something hard.

“Her grandmother always said, ‘When you feel bad about yourself, go out there and do something for somebody else’.

“That’s an incredible motto that my family has always lived by. My mother is just remarkable.”

This motto will stand any child in good stead, and following the announcement that revealed August’s name, Fergie herself wrote a piece recounting her favourite moments as a mother.

In People magazine, the 61-year-old said “teatime has always been an important part of our family day” as it gave her and her children’s father Prince Andrew time to share news of what they had been up to.

She added: “When my girls were younger, we would sit and chat about their day at school, any achievements or concerns they might have.

“We would have a magical feast of finger sandwiches, cocktail sausages, biscuits, scones with clotted cream and jam and bite-size cakes.

“Of course, afternoon tea food became more adult as the girls grew older, with smoked-salmon sandwiches and cucumber sandwiches replacing the traffic light ones, but the basic ethos was the same: a time of sharing.”

It is close to Fergie and Andrew’s home, which they share at the Royal Lodge.

In an Instagram post, Fergie detailed her delight at welcoming her grandson, describing him as a “beautiful blessing and a bringer of such love”.

She also confessed that Jack and Eugenie “are, and will be, wonderful parents”.

Fergie, who divorced Andrew in 1996, had previously outlined exactly what type of mother Eugenie would be, outlining how “incredibly empathetic” the 30-year-old is.

Speaking to Us Weekly, Fergie added last year: “She is a very strong and determined person, always looking for the truth in all she does.

“Her work for the Anti-Slavery Collective is a commitment she steadfastly campaigns for, to give everyone the chance to have a voice.”

August is currently 11th-in-line to the throne, but will move down to 12th when Harry and Meghan’s second child arrives this year.