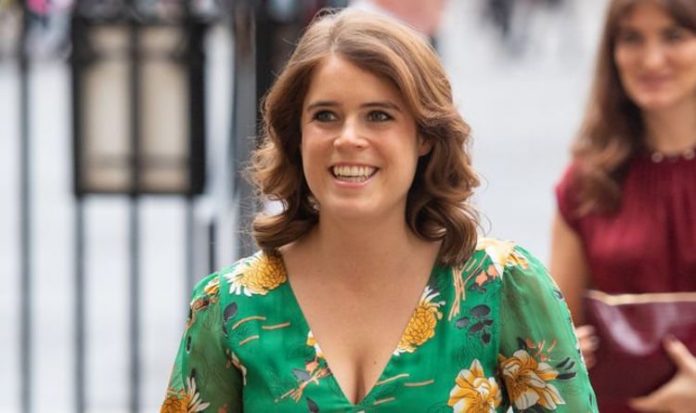 Princess Eugenie, 30, and husband Jack Brooksbank are expecting their first child together. While details around royal pregnancies are usually kept under wraps, an insider has claimed their royal baby is due in “mid-February”, Hello Magazine reports.

The baby will be the Queen, 94, and Prince Philip’s, 99, ninth great-grandchild and Prince Andrew, 60, and Sarah Ferguson’s, 60, first grandchild.

Last autumn Eugenie and Jack confirmed they were expecting their little one to arrive in “early 2021.”

As well as sharing a sweet selfie of themselves, the happy couple posted another sweet photo of them holding up a pair of baby booties.

The post prompted an outpouring of love from fans many of them commenting to congratulate the couple.

However, since then Eugenie and Jack have shared no further information about their royal pregnancy.

While Eugenie and Jack were understood to be spending lockdown with Prince Andrew and Fergie at the Royal Lodge in Great Windsor Park, new reports suggest they are at Meghan Markle and Prince Harry’s UK home, Frogmore Cottage.

However, just days after Eugenie and Jack were said to have moved into Frogmore, they were reported to have left.

Since then reports emerged that Eugenie and Jack were spending lockdown at the Royal Lodge with Andrew and Fergie but now a royal insider has claimed otherwise.

According to a source, Eugenie and Jack have been at Frogmore all along as they prepare to become parents.

They told Hello:  “Eugenie and Harry have always been close and they chat privately all the time.

“It was Harry who suggested she and Jack could use Frogmore Cottage because it is much bigger than their cottage at Kensington Palace. It is a case of one family member reaching out to another.”

Where will Princess Eugenie give birth?

While Eugenie has not shared details of her birth plan and is unlikely to do so, there are a few places the royal could choose to give birth.

She may choose to follow in her mother Sarah Ferguson and Meghan Markle’s footsteps and have her baby at London’s private Portland Hospital.

The Lindo Wing at St Mary’s hospital has also been a popular choice with royal mother’s in the past and is where Kate, Duchess of Cambridge had all three of her children.

Unlike Kate, who posed for official photos with each of her newborns on the hospital steps, Eugenie is unlikely to have an official photoshoot to mark her child’s arrival.