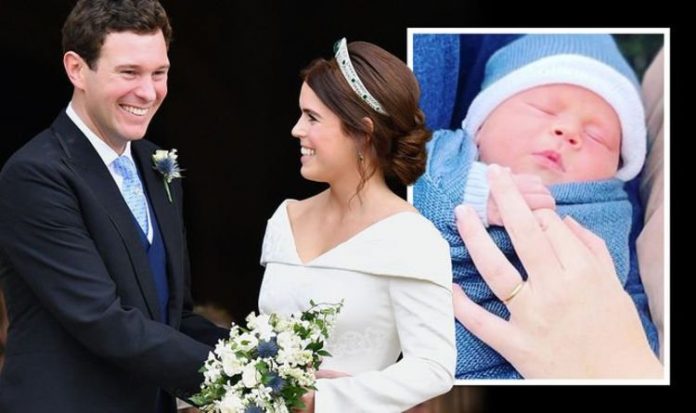 The Princess of York tied the knot with Jack Brooksbank in a star-studded ceremony at St George’s Chapel in Windsor Castle in October 2018. The bride and groom posed for an official photo in front of Queen Victoria’s consort, Prince Albert. By choosing to stand in front of this framed picture, some followers are convinced Eugenie was already planning to honour her ancestor when welcomed her first baby.

One fan tweeted: “The fact that Princess Eugenie and Jack posed in front of Prince Albert’s (middle name August) portrait for their wedding picture and then almost three years later named their first child after him, August Philip Hawke, gives me all the feels.”

A second said: “That is a beautiful gesture.”

On Instagram Stories, she said: “On his grandfather’s birthday weekend, thinking of my grandfather, we are introducing our little boy.

The baby’s middle name Philip is a sweet nod to the Duke of Edinburgh, 99, while Hawke is a Brooksbank family name.

Rev. Edward Hawke Brooksbank held the office of Justice of the Peace for the West Riding of Yorkshire.

Eugenie and Jack’s decision to include Philip in their son’s name will be seen as a “mark of respect” as the duke approaches his 100th birthday.

Royal expert Joe Little, managing editor of Majesty magazine, said: “I would have been surprised if Philip hadn’t featured somewhere, given not so much the fact that Eugenie’s grandfather is in hospital but the fact that, all being well, he will celebrate his 100th birthday in a few months.”

The Royal Family are expected to get together to celebrate the occasion at the beginning of the summer.

Prince Harry is set to fly in from California but will not be accompanied by Meghan as she is expecting the couple’s second child.

The Duchess of Sussex is believed to be as far gone as six months and could tipped to give birth at the end of spring.