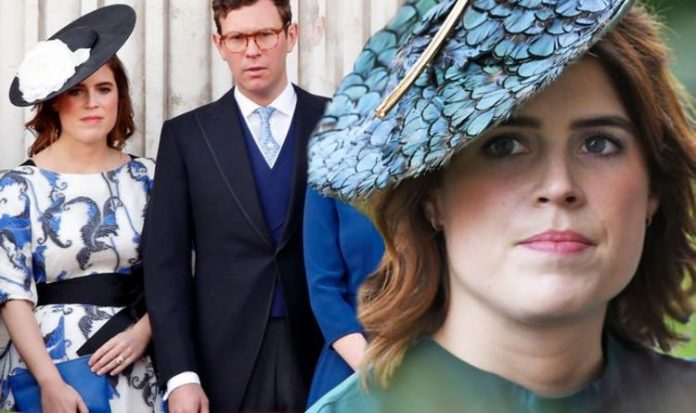 The couple have hit the headlines in recent weeks after announcing they were expecting their first child together, who is due to be born in early 2021. The announcement followed shortly after Eugenie’s sister Princess Beatrice shared that she had secretly wed her fiancee Edoardo Mapelli Mozzi in May, with around only 20 guests attending the special occasion. But detailing her own nerves after she met Jack, Eugenie delivered a heartwarming account of exactly what the pair thought of each other.

Before the couple wed, she said it was “love at first sight” for them both.

Jack then recalled: “I saw you first, didn’t I? And we just stared at each other.”

“I think I rang my mum that night and said, ‘I’ve met this guy…”

The interview was with ITV’s Eamonn Holmes and Ruth Langsford, and was released as part of the broadcaster’s coverage of the spectacular wedding two years ago.

The couple married months after announcing their engagement, in what would be one of the most celebrated years for the Royal Family.

Their union followed that of Eugenie’s cousin Prince Harry, who wed Meghan Markle, sparking street parties and celebrations being enjoyed across the nation.

Ahead their marriage, the couple also chatted to the BBC’s ‘The One Show’ to discuss their wedding and how Jack proposed to the excited Eugenie.

But despite the excitement prior to the marriage, Eugenie did open up about how she was feeling – and dropped a confession on how she wanted the day “to be perfect”.

Speaking to British Vogue in September 2018, Eugenie claimed she was “not stressed at all” about the marriage yet was feeling pressure to put on a brilliant day for relatives and royal fans.

She said that the experience was “nerve wracking because you want it to be perfect but then you realise that you’re going to be with the person forever so nothing else really matters”.

Around 800 people attended Eugenie’s wedding – a huge number when compared to Beatrice’s, which was originally postponed as a result of the coronavirus pandemic.

The couple’s wedding was covered by ITV’s ‘This Morning’ and was watched by an estimated live audience of around three million.