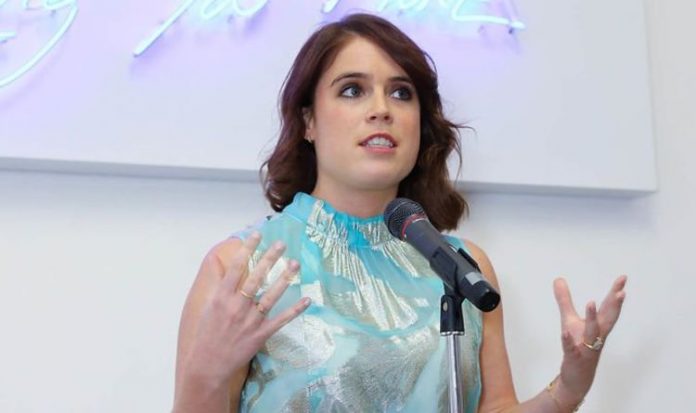 “HRH Princess Eugenie’s own personal story has been an inspiration to many of us and our families who are affected by scoliosis.

“We know that she will not only relate to the work that SAUK does in supporting those with scoliosis and their families and raise awareness of scoliosis, but also help to raise the profile of the charity and expand its appeal and its message.”

Stephanie Clark, co-founder and chair of SAUK, said after Eugenie’s appointment: “I am absolutely delighted and grateful that Princess Eugenie is to be our royal patron.

“Her bravery and experience makes this a very personal decision, and will continue to offer encouragement to the many people of all ages who are struggling to come to terms with their scoliosis.”

Princess Eugenie suffered from scoliosis during her childhood.

She underwent life-changing surgery at the Royal National Orthopaedic Hospital (RNOH) when she was 12 years old, during which surgeons added titanium to her spine to rebuild.

Ever since, Princess Eugenie used her influence and royal platform to shine a light on scoliosis and how it can affect one’s life.

Once an adult, the royal became the patron of the hospital and visited it in 2014.

In June 2018 she shared her personal X-rays on Instagram to show the pins and rods she has on her spine.

READ MORE: How Zara Tindall children will be related to Princess Eugenie baby

“I also want to honour the incredible staff at The Royal National Orthopaedic Hospital who work tirelessly to save lives and make people better.

“They made me better and I am delighted to be their patron of the Redevelopment Appeal.”

In October that year, the Princess decided to make the scar on her back, resulted from her surgery, a focal point of her wedding outfit.

Upon marrying Jack Brooksbank at St George’s Chapel, Eugenie wore a low-back dress created by Peter Pilotto and Christopher De Vos, showing the scar to the world as she walked up the steps of the church.

Following her nuptials, the royal explained why she chose not to cover her scar with her dress or a veil.

Speaking to The Telegraph, Princess Eugenie said: “After one or two initial meetings where I said I wanted to show my back and scar, we had a fitting and in their first attempt at the shape and design of the dress, they got me and the vision in one.

“From there, we realised that the back of the dress was the centre point and a veil would take away from the scar and the beautiful design they had created.”

NHS surgeon Jan Lehovsky, who performed the surgery on Eugenie and his team were invited to the princess’ wedding.

Praising the doctor’s work and the positive impact it had on Eugenie’s life, her mother Sarah Ferguson said ahead of the nuptials: “She did have what would have been very serious curvature of the spine.

“The wedding is about love, future and inclusivity… What a huge, huge day for health, for the NHS, for the RNOH, and for hope.

Princess Eugenie is the patron of the Royal National Orthopaedic Hospital (Image: GETTY)

“This is why this wedding is so beautiful – it’s hope for other children suffering from scoliosis.”

Earlier this month, Eugenie also spoke about body positivity and why she is proud of her scar.

Taking to Instagram, she praised singer Selena Gomez for showing off the scar left after her kidney transplant.

The royal said: “Let’s be proud of our uniqueness.”