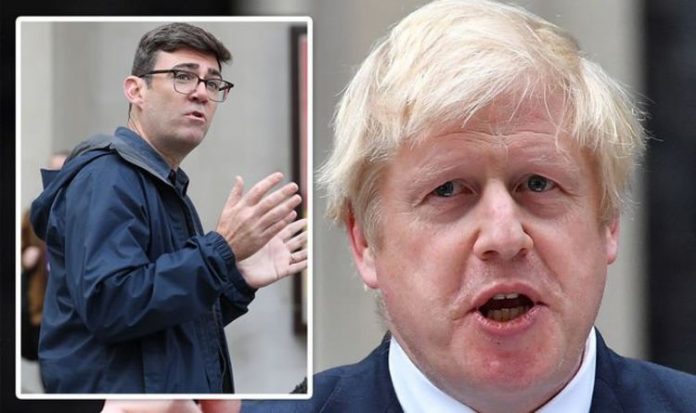 Mr Johnson is reportedly set to ignore a ministerial rebellion by placing Greater Manchester into a Tier Three lockdown today. The county’s mayor, Mr Burnham, has accused the Government of trying to make his region a “sacrificial lamb” by imposing the strictest measures without enough financial support. Merseyside and Lancashire have already been placed under the highest level of measures and the Government is offering to pay two-thirds of wages for employees affected.

Mr Burnham has insisted Greater Manchester is “not in any way complacent” about the hospital situation as the number of COVID-19 patients rose significantly in a week, adding it was about “fairness” to help “low-paid and self-employed people”.

But, it can be revealed that Mr Burnham also championed a plan to privatise parts of the NHS during his time in the Cabinet.

It was during this period that Hinchingbrooke Hospital was claimed to be offered to private profiteers “on David Cameron’s watch” amid rising strains on hospitals.

But that “offering” actually took place under the Brown Government in 2009.

The Treasury and the Department of Health approved the outline business case and procurement plan, which meant that private organisations would be invited to bid to run the hospital.

Ahead of the 2015 general election, Mr Burnham sought to reduce the vote to a “binary choice” between “a part-privatised, two-tier health market under David Cameron” and “a public, integrated national health and care service under Labour”.

It came as private firm UnitingCare won an £800million deal to provide care for older and mentally ill people in Cambridgeshire after the Coalition Government’s reorganisation of healthcare came into force.

Mr Burnham, at the time, warned not to “tie the hands” of the incoming Labour Government by signing deals worth hundreds of billions of pounds before the election.

But, in 2010, Circle Health was awarded a contract to run Hinchingbrooke Hospital – the first time an NHS hospital had been wholly run by a private firm.

The decision to contract out the NHS hospital’s management was made by the then Health Secretary – Mr Burnham.

Health service unions called on the Government to suspend the process they believed would lead to the privatisation of an entire NHS trust and its £40million debt.

Under the plan set out by Mr Burnham, internal NHS organisations would be the “preferred provider” of services within the NHS.

But as Hinchingbrooke was deemed to be a failing trust due to its massive accumulated debt, the regional health authority was able to put the management contract out to private companies.

Karen Jennings, head of health at Unison, said at the time: “The views of local people, who want to keep their hospital in the NHS, are being trampled on.

“This whole outsourcing process is an unnecessarily costly and dangerous experiment.

“Hinchingbrooke Hospital does have debts, but they are no worse than many other trusts.”

Despite this, in 2015, Circle announced it was pulling out of its contract.

It blamed a £5million loss and an NHS crisis including “unprecedented increases in accident and emergency attendances, insufficient care plans for patients awaiting discharge, and funding levels that have not kept pace with demand”.

The Care Quality Commission (CQC) released a report into Circle’s management of Hinchingbrooke Hospital that may highlight the real reason.

Hinchingbrooke was given the CQC’s worst ever rating for “caring” and both “safety” and “leadership” were also at the bottom.

But Mr Burnham said he would fight any attempts to blame him for failings in the NHS before 2010.

It came amid the release of a report that criticised “excess” death rates at 14 NHS trusts in England while he was Health Secretary by Sir Bruce Keogh.

It was commissioned by Mr Cameron after Robert Francis’s damning inquiry into the unnecessary deaths of up to 1,200 patients in Stafford Hospital in 2010.

In an interview on Sky in 2013, Mr Burnham said: “To be honest, I’m fed up of these general accusations being hurled in my direction.

“I will account for all of the things that I did as Secretary of State.

“I took actions to reveal what happened at Stafford, I took actions at Basildon, at Thameside. I left warnings in place at five hospitals.”

However, on reflection of his role, he told The i in 2018: “It was a tumultuous time, that was when the Government was starting to seriously lose its way.

“I arrived at the Department of Health on June 5 – three days after a world health pandemic had been declared on swine flu.

“I walked straight into that. It dominated my first three months in office.

“We hadn’t had a world health pandemic in living memory, so I was walking into a department that is normally quite sure-footed, but was a bit wrong-footed, put it that way.

“Plans had been laid but then the reality was hitting and that was causing all kinds of challenges.”

Stafford Hospital was run by the Mid Staffordshire NHS Foundation Trust and the scandal came to national attention because of an investigation by the Healthcare Commission in 2008, which uncovered a litany of substandard care.

However, both Mr Brown and then-Health Secretary Alan Johnson apologised to those who suffered at the hospital by the time Mr Burnham was dealing with the fallout.

Mr Burnham said: “I had inherited a situation where there were growing calls for an inquiry.

“MPs wanted, rightly, an inquiry, but the Department of Health had resisted one.

“And it had done so on the grounds that if you subjected one hospital to a full public inquiry it wouldn’t be able to function, basically.

“I created an independent inquiry and if he needs to compel witnesses because they weren’t coming forward, come back to me and I would upgrade it.

“It’s a little frustrating for me now when people rewrite that story because I did that – and I did it with the full weight of the Department of Health opposing what I was trying to do.”