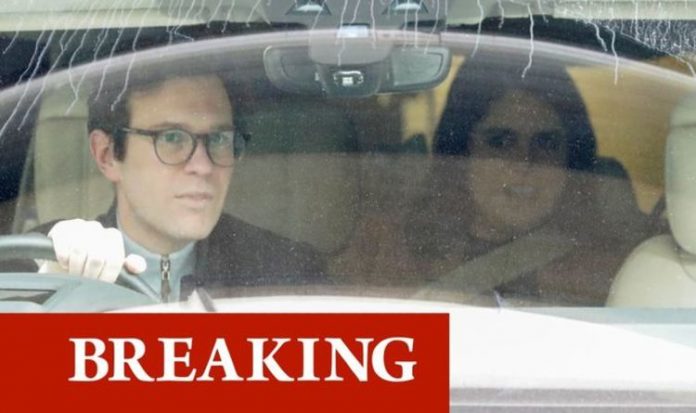 Princess Eugenie, 30, has been spotted for the first time since giving birth to her royal baby as she was photographed leaving hospital on Friday morning. The new mum was snapped sitting beside her newborn son as her husband Jack Brooksbank drove them home from London’s private Portland Hospital.

The princess gave birth on Tuesday morning and is yet to announce her son’s name.

A Buckingham Palace announcement about the birth read: “Her Royal Highness Princess Eugenie was safely delivered of a son today, 9th February 2021, at 0855hrs at The Portland Hospital. Jack Brooksbank was present.

According to one royal expert, Eugenie has formed a bubble with her parents Andrew and Fergie allowing them to spend time with their first grandchild.

Writing in the Telegraph, royal editor Camilla Tominey said: “It is certainly convenient that Eugenie and Jack are now based just a stone’s throw away from Windsor Castle, having moved into Frogmore Cottage following the departure of Harry and Meghan to the US almost a year ago (Reports of them having moved out after six weeks appear wide of the mark).”

She added: “It is understood the new parents will be spending a great deal of time at Royal Lodge, the Windsor home Prince Andrew shares with his ex-wife Sarah Ferguson, with whom they are now able to form a ‘support bubble’ following the baby’s birth.”

When will the royal baby get to meet the rest of the Royal Family?

As lockdown remains in place in England it could be weeks until Eugenie’s son gets to meet the rest of her royal relatives.

Eugenie’s beloved sister Princess Beatrice is based in London with husband Edoardo Mapelli Mozzi and may be stopped from meeting her nephew by lockdown restrictions.

One way Eugenie may be able to ensure her son gets to meet the wider family before lockdown ends is by having him christened as soon as possible.

According to Government guidelines, some christenings can still go ahead as they can count under the exception of communal worship.