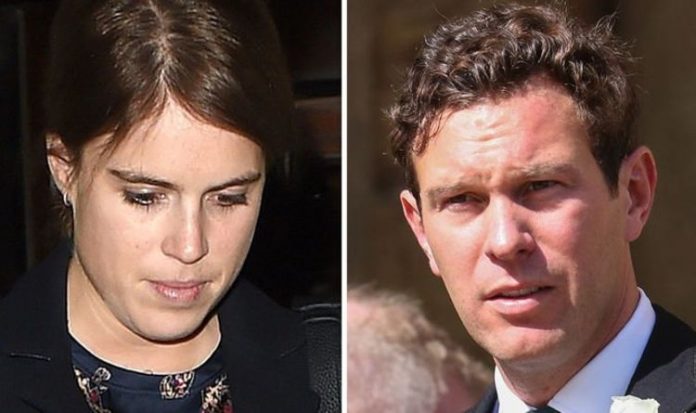 The couple married months after announcing their engagement two years ago, in what would be one of the most celebrated years for the Royal Family. Their union followed that of Eugenie’s cousin Harry, who wed Meghan Markle, sparking street parties and celebrations being enjoyed across the nation. But before they married, Eugenie made a nod towards Jack with a surprising outfit choice, while she attended a garden party at Buckingham Palace.

During the event, Eugenie was seen wearing a cinched-in navy dress, and coordinated it with navy pumps, and a navy fascinator marked with the phrase LOVE on its brim.

A report from Now to Love added: “While the message could have simply been a general proclamation L-O-V-E, we prefer the idea that it was intended as a not-so-secret message to her one true love.”

Just before their marriage, the couple took to the BBC’s ‘The One Show’ to discuss their wedding and how Jack proposed to the excited Eugenie.

On the show, Eugenie described Jack’s marriage proposal as a “complete surprise” while Jack went further to add exactly what happened on the joyous day.

READ  What Trump really thinks about Theresa May... and the Queen - UK

He said: “There was a beautiful volcano and the sun was setting. It was amazing.

Eugenie added: “The lake was so beautiful. I said, ‘This is an incredible moment,’ and then he popped the question. It was really surprising even though we’ve been together for seven years.

“I was crying. We couldn’t be happier, because we knew it was going to end up this way.”

JUST IN: Beatrice branded ‘ridiculous’ amid claims she suffered being royal

She said that the experience was “nerve wracking because you want it to be perfect but then you realise that you’re going to be with the person forever so nothing else really matters”.

She added: “There’s a lovely quote from Maya Angelou, which I’m paraphrasing, that ‘No one will remember what you said but they’ll remember how you made them feel.’

“It’s about how we feel, but also how our family and friends feel.

“I want it to be beautiful and fun and to bring out our personalities as much as possible.”