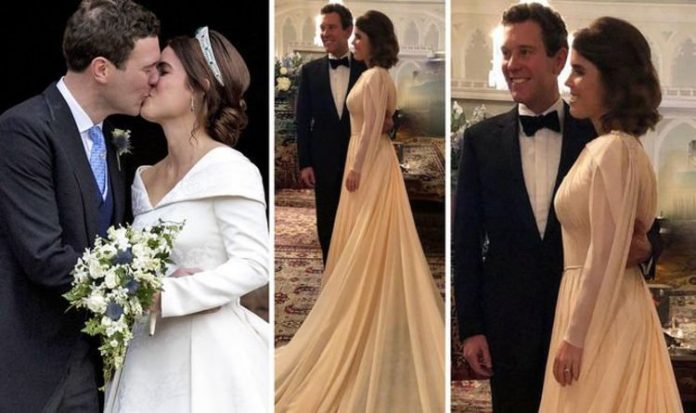 The Princess of York posed alongside her husband Jack Brooksbank in the photo taken at their reception. Zac Posen, designed Eugenie’s elegant blush floor-length gown which she wore to the celebration held at the Royal Lodge in Great Windsor Park hours after she got married in the nearby St George’s Chapel.

The American designer, 39, said he will forever look back on the royal nuptials as a “magnificent magical day”.

And responding to the couple’s news that they will welcome their first child in spring, he wished the expectant parents happiness for their future.

“It was so special creating this gown for this wonderful moment in your life, being with you and the family on the magnificent magical day, I will remember forever.

“Wishing you both continued love and happiness always with your new baby angel on the way.”

The snap showed the groom with his arm around Eugenie, whose dress is sprawled out across the floor.

She said: “I wanted something reminiscent of Grace Kelly in To Catch a Thief so I showed that for reference and Zac came up with this silk that he’d found from Manchester.

“Every single draping effect, every single detail, every button, it’s all painstakingly done by him and his team.”

Last year Mr Posen shared another behind-the-scenes snap of Eugenie trying on the after wedding dress.

He posted the snap to wish the princess a happy 29th birthday.

He wrote: “Every now and then you meet somebody who just knocks your socks off.

“This last year I got to know a young lady who possessed natural elegance, a heart of gold and sophisticated humour.

“My studio and I had the honour (and the best time) collaborating with her on her special gown.

“Best of all she is dedicated to using her privilege to help our world and its people with her project @the_anti_slavery_collective.”

Eugenie, 30, and Jack, 34, celebrated their second wedding anniversary on Monday, weeks after they announced their baby news.

Eugenie has been spotted running errands in west London, covering her baby bump in flowy dresses and winter coats.