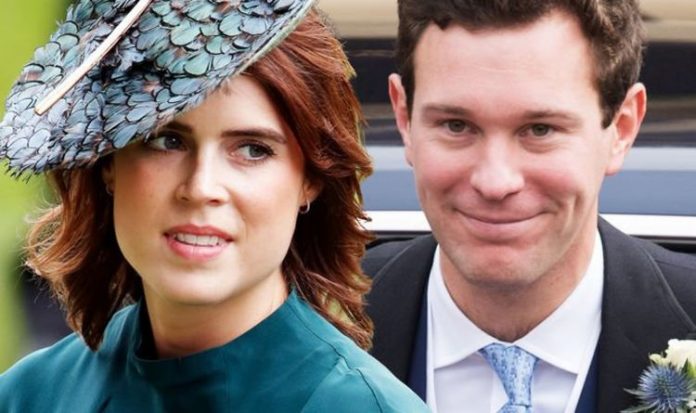 Joanna Newton, Jack’s grandmother, made the bold claim after news emerged that he had proposed to Princess Eugenie while they holidayed together in Nicaragua. Since their engagement announcement, Eugenie and Jack have remained firm favourites with Royal Family fans, who revelled in the couple’s spectacular wedding, and their recent admission they are expecting their first child together. The royal world went into meltdown following the pregnancy bombshell, with fans from across the world now eagerly awaiting the baby’s arrival early next year.

But in a throwback report, Ms Newton – then 91 – admitted that her grandson was very lucky to be marrying into the Windsor family, especially because he was an “ordinary” man.

Speaking two years ago, Ms Newton said that she “never thought for a moment” the pair would get engaged, but was nonetheless “very happy” for the couple.

She continued: “I never thought he would get married to a royal. He’s a charming boy and all that but not the most intelligent and I would never have thought this would happen.

“I just never thought it would go this far with her being a member of the Royal Family. But Jack has always had lovely manners and has always been a good egg.

“I would call him ordinary, I wouldn’t say there is anything special about him, he’s a good-looking, nice chap and I think it says a lot about Eugenie that it’s him she wants and it’s lovely.”

Eugenie and Jack would wed in October 2018, nine months after they first announced their engagement.

Their wedding followed in the footsteps of cousin Prince Harry’s marriage to Meghan Markle in the same year, which would mark an iconic 12 months for the Firm.

Reflecting on her engagement, Eugenie told the BBC’s ‘The One Show’ ahead of her wedding about how Jack had proposed and the impact it had on the now-30-year-old.

READ  Should Meghan Markle and Harry lose ALL titles and patronages due to Oprah row? | Royal | News (Reports)

“I was crying. We couldn’t be happier, because we knew it was going to end up this way.”

In an interview with Vogue in the same year, Eugenie also detailed the engagement ring she had received, which is an oval cut Padparadscha sapphire, surrounded by diamonds.

It is set on a yellow gold band and is reminiscent of the ring her father Prince Andrew gave to her mother Sarah Ferguson.

She said of the ring: “It’s very special.

“Jack found the sapphire and thought it looked like me because it changes colour and he thought that that was part of my character, which is quite sweet.”