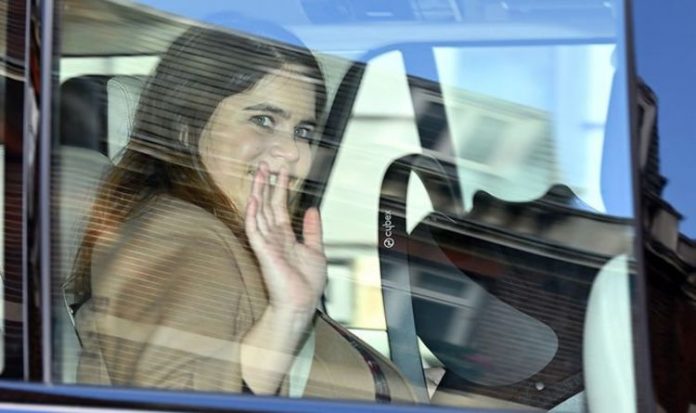 Princess Eugenie became a first-time mother this week after delivering a newborn son at The Portland Hostpital. However, Eugenie is unlikely to give her as-of-yet unnamed son a royal title, according to ABC royal contributor Omid Scobie. He suggested that the move away from giving titles to children is about more than tradition and shows that royals are preparing for the end of the monarchy.

Speaking on The HeirPod, Mr Scobie said: “Unlike the name, which will drop over the next few days, a title may never come for this baby.

“The main reason is due to tradition. Titles are passed down from the father’s side of the family, and of course, Jack Brooksbank as a commoner makes him and Eugenie’s children commoners too.

“What is interesting here is that Queen, as we have seen in the past, does have the power to make Jack an Earl and they could then give their children titles.

“But what we have seen over the years is a trend away from titles.”

He continued: “Princess Anne was a trailblazer on this when she declined a peerage for her first husband since she wanted to raise her children without titles.

“Only a couple years ago, we saw the Sussexes choose not to give a title to Archie.

“This is continuing trend here with Eugenie.

“As the royal family focus on a more streamlined model, Eugenie and Beatrice are not working royals so the need for the title is a bit unnecessary.

“We have even seen some pushback from the Wessexes recently.

The Queen’s granddaughter, 30, had husband Jack Brooksbank at her side in central London when their son – the Queen’s ninth great grandchild – was delivered at 8.55am on Tuesday.

The Queen, The Duke of Edinburgh, The Duke of York, Sarah, Duchess of York, and Mr and Mrs George Brooksbank were delighted with the news.

Buckingham Palace also announced that “Her Royal Highness and her child are both doing well”.

They were later photographed driving away from the hospital.