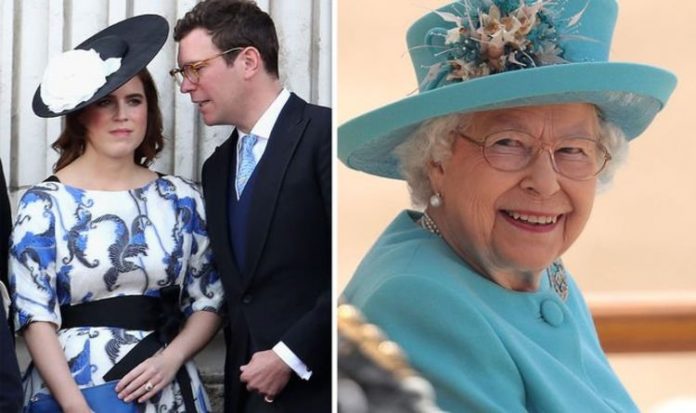 Princess Eugenie, 30, and husband Jack Brooksbank, 36, are preparing to become parents. Queen Elizabeth II’s grandaughter confirmed she pregnant last autumn and told fans her and Jack’s royal baby was due in “early 2021.” Earlier, this week a source close to the couple claimed Eugenie’s due date was just weeks away and that the baby was expected to arrive in “mid-February.”

The coronavirus pandemic means Eugenie’s royal baby is unlikely to be introduced to the world in the traditional manner.

Unlike Meghan Markle, 39, and Kate, Duchess of Cambridge, 39, who had official photoshoots with their newborns, Eugenie’s baby is unlikely to meet the public straight away.

As the Princess of York is an avid Instagram user, many expect her to share the first photos of the baby on social media.

Eugenie’s baby may, however, be able to make a spectacular public debut if Trooping the Colour goes ahead this spring.

The Queen and Prince Philip have both received the Covid-19 vaccine and according to palace insiders, there are plans for the Queen to return to Buckingham Palace before the summer.

Trooping the Colour takes considerable planning and while it may not go ahead in its traditional format there is still expected to be some kind of official birthday celebrations.

While the Royal Family has been kept apart by the coronavirus crisis they are expected to reunite en masse this spring.

Prince Harry, 36, and Meghan Markle, 39, have not been back in Britain since last March but are due to return to the UK for Philip and the Queen’s birthday celebrations.

Prince Louis made his Trooping the Colour debut in 2019 and stole the show by waving to fans from the balcony.

This year Meghan and Harry’s son Archie Harrison could be among the young royals to make a balcony appearance.

Eugenie’s beloved sister Princess Beatrice, 32, is also expected to be there with her husband Edoardo Mapelli Mozzi.