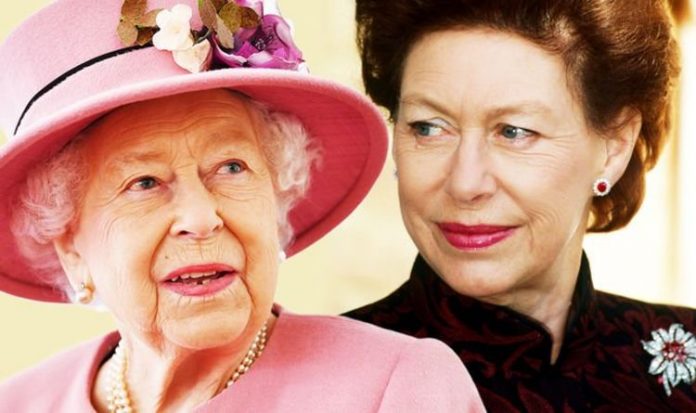 Margaret’s popularity has had a sudden burst in recent weeks following the release of the new season of The Crown, which follows her painful romantic failures in later life. She is often compared to Princess Diana, as both went against many protocols that had hitherto been set in stone. Described as the “wild child” of the family, Margaret consistently found herself in the headlines.

This lifestyle of moving in artistic circles outside the immediate aristocracy was said to have led the royal to find herself at “constant odds” with her sister, Queen Elizabeth II.

It was after the coronation that Margaret found herself in a relationship with Peter Townsend, an equerry to both her father and Elizabeth II.

At this point, as TheTalko explained: “She (Margaret) found herself at constant odds with the Queen because of her choice in partners.”

Princess Margaret: The royal is said to have been at ‘constant odds’ with her sister the Queen (Image: GETTY)

The problem was that Peter was 16 years Margaret’s senior, and previously divorced, a detail which was highly frowned upon at the time.

Controversy inflamed their relationship after the Queen refused to give them permission to marry, as well as the State and Church rejecting divorce; she was instead told to wait two years until she was 25 and more able to defend herself under the Royal Marriages Act of 1772.

Yet, after the two years lapsed, the Queen continued to refuse their marriage request; although an agreement was later drawn up under the new Prime Minister Anthony Eden – being a divorcee himself – yet Margaret quickly announced that she would not be marrying Peter.

JUST IN: Helena Bonham Carter family: Who is The Crown actress related to?

Royal Family: Elizabeth II, Margaret and their parents together in 1942 (Image: GETTY)

Archived records suggest that the Queen drew up a special arrangement for Margaret and Peter that would have allowed them to marry, with Mr Eden quoted as having said in a letter at the time: “Her Majesty would not wish to stand in the way of her sister’s happiness.”

A further divide was wedged between Margaret and her sister when Elizabeth’s youngest son, Prince Edward came of age – a theme explored in episode seven of the fourth season of The Crown.

Here, due to the so-called “Hereditary Principle” – the episode’s namesake – when Edward reached 21 years in 1985, Margaret was no longer a senior working royal.

The 1937 Regency Act set out that there are only ever allowed to be a maximum of six “Counsellors of State” or senior royals who can deputise for the Queen in an official capacity.

Royal feud: The sisters had their disagreements but kept a strong bond (Image: GETTY)

While Margaret was counted as one of these six before Edward’s birthday, afterwards, she moved down the pecking order.

In what many have perceived as a fiercely harsh move, Margaret in the episode, played by Helena Bonham Carter, is dejected and worn down by the news that she is no longer a Counsellor of State.

Little is known about how she took the news at the time in reality, however.

And while there existed an obvious tension between the sisters, they were said to have had a great relationship throughout the years.

In the candid 2019 memoir, ‘Lady in Waiting: My Extraordinary Life in the Shadow of the Crown’, Margaret’s lady-in-waiting, Anne Glenconner, wrote about her and the Queen’s loving relationship.

She told People: “Margaret was terribly loyal to the Queen — and being five years younger, I think it would have been much more difficult if she had been just (a little) younger than the Queen.

“There would have been more rivalry. She never said anything.”

Later in life, Margaret fell in love with Antony Armstrong-Jones, a photographer, and the two got married in 1960.

Princess Diana: Margaret is said to have been the first royal to welcome Diana into the family (Image: GETTY)

The pair spent the next 18 years together and had two children, Lady Sarah Chatto, and David Armstrong-Jones.

Their relationship again broke royal protocol as Antony was outside of the Court and aristocratic circles Margaret would have traditionally floated in to find a spouse.

Differences in lifestyles and work commitments, combined with the pair’s alleged infidelities, eventually led to their divorce in 1978.

Despite this, they remained close right up until Margaret’s death in 2002.