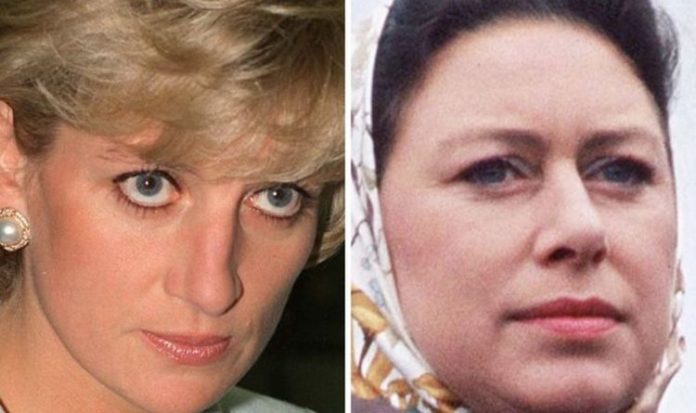 Diana, nicknamed the People’s Princess, sparked controversy with her tell-all interview with the BBC’s Martin Bashir in 1995. An estimated 23 million people tuned in around the world and witnessed Diana openly talk about Prince Charles’ infidelities. She famously remarked there were “three of us in this marriage, so it was a bit crowded”.

The interview ultimately precluded the pair’s divorce, which was ordered by the Queen in 1996.

Although Diana was, from this point onwards, free from the Royal Family, it forever tarnished her image in the eyes of the Firm.

Many family members refused to forgive her for going public with the story, despite many of the allegations later being proved true.

Princess Margaret is one royal said to have held a particularly fierce grudge against Diana, despite, according to reports, her being one of the first family members to welcome Diana into the establishment.

Margaret is also said to have been the first to notice the early warning signs things between Diana and Charles were going awry, alerting this fact to the Queen and other members of the family, as dramatised in the most recent season of Netflix’s The Crown.

TheTalko website revealed how Margaret took her disdain for Diana to the late Princess’ funeral, refusing to bow her head as the hearse drove past.

The publication claimed: “Even though the story was true, Margaret could never forgive Diana for making the family look bad.

“From that day forward she wouldn’t let her children talk to Diana, and she couldn’t even be around magazines with her image on them.

JUST IN: Queen’s cousin debunks The Crown’s portrayal of Margaret

“According to sources, when Diana passed away in 1997, Margaret didn’t even bow her head in respect.

“Apparently she gave a lazy salute to the casket that has been compared to shooing away a fly.”

According to TheTalko, Margaret felt as though “Diana had turned her back on the Royal Family”.

Royal Family: Margaret is said to have been one of the first family members to welcome Diana (Image: GETTY)

The Queen: Margaret was the Queen’s only sibling (Image: GETTY)

Her depiction in The Crown has been met with equal shock and scepticism.

David Bowes-Lyon, a cousin of Margaret, branded the show and her impression as “fiction pretending to be fact”.

One scene in particular, that showed Margaret arguing with the Queen Mother after she found out she had two secret cousins, caused particular “frustration” within the Royal Family.

The episode focused on two of the Queen Mother’s nieces, Nerissa and Katherine Bowes-Lyon, who suffered severe learning difficulties and attended an institution from their early years.

Talking to The Daily Telegraph, Mr Bowes-Lyon said: “She knew who they were in every respect, as you would any cousin.

“We spoke about them when discussing relatives in general, talking over dinner and lunches. She knew exactly who they were and what had happened.

“It is completely wrong to say they were forgotten and certified as lunatics.”

Meanwhile, the Queen was widely reported as having been devastated by the interview and the subsequent image it left on the family.

She famously described 1992 as her “annus horribilis” – her “horrible year”.

Her Majesty: The Queen is said to have been upset by the Diana interview (Image: GETTY)

It was the year that saw Charles and Diana separate, the Duke of York split from Sarah Ferguson, a fire break out at Windsor Castle, and the publication of Andrew Morton’s explosive biography on Diana.

Others have also suggested that the Queen was upset by Diana’s interview.

Sir Richard Eyre, ex director of the National Theatre, told Channel 5 documentary ‘Diana: The Interview That Shocked The World’ in 2020 he had lunch with the Queen in 1995 and she was upset by the interview.

He claimed: “I had lunch with the Queen not long after and she said to me unprompted, ‘How are things at the BBC?’ and I said, ‘Oh well, fine’. And she said, ‘Frightful thing to do, frightful thing that my daughter-in-law did’.”

In June 1996, the Queen ordered Charles and Diana to divorce, something which was finally realised two months later.

Princess Diana tragically passed away just a year later in a car accident in Paris.