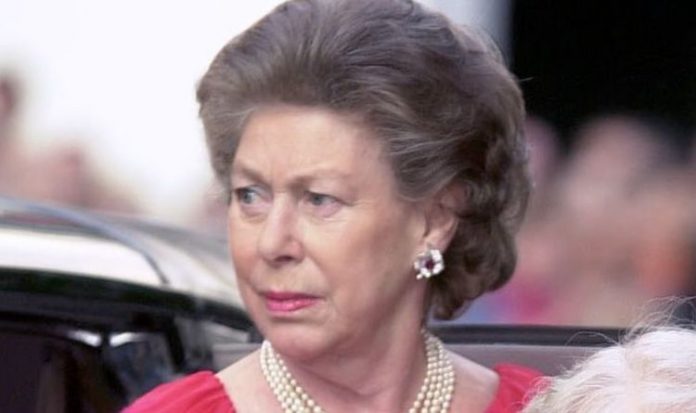 Princess Margaret put an end to her close friendship with Princess Diana after the senior royal began to discuss her fraught relationship with Prince Charles in public. The Queen’s youngest sister had long shown her commitment to both Her Majesty and the Crown through years of active duty, a dedication she expected Diana to also adopt. But according to her biographer Christopher Warwick, Margaret could not forgive the Princess of Wales for “betraying” the Queen.

Speaking to Channel 5’s “Elizabeth and Margaret: Love and Loyalty”, Mr Warwick said: “To start off with, she and Diana got on extremely well.

“There was an occasion when Diana had a jacuzzi, a jar-cuzzi as Princess Margaret would say, and Diana wanted her to see it. And the Princess thought it was so brilliant that she wanted a jacuzzi as well.

“They were very close to one another. Until it all started to go wrong between Diana and Charles.”

He continued: “Margaret thought that Diana wasn’t doing the right thing, that she thought this was disrespectful to the Queen, to the idea of monarchy.

JUST IN: Meghan Markle told to ‘get out’ of lawsuit now or face ‘Streisand effect’

“That’s when there was the cut off.

“If she felt that you were in any way letting the Queen down, being disrespectful to the Queen, betraying the Queen. That was it.”

Royal author Ingrid Seward also noted Margaret and Princess Diana had shared a close friendship in the early years of the Princess of Wales’s settling in her new role.

Ms Seward continued: “And I think she tried to help her sister see how difficult life was for her children and how sometimes it was better to say, ‘forget it, and let them get on, let them divorce.’

Author Craig Brown claimed in the book ‘Ninety-Nine Glimpses of Princess Margaret’ the royal had gone as far as ordering her children not to speak to Diana after she gave her shocking interview to BBC Panorama.

Mr Brown said: “She wasn’t keen on others misbehaving. Broadcasting your feelings to the world without a warning was considered an amazing kind of betrayal even if what Diana was alleging was true.

The author added that “she wouldn’t let her children talk to her. These were all royals living in Kensington Palace. But if you crossed swords with Princess Margaret, she was a very unforgiving type.”