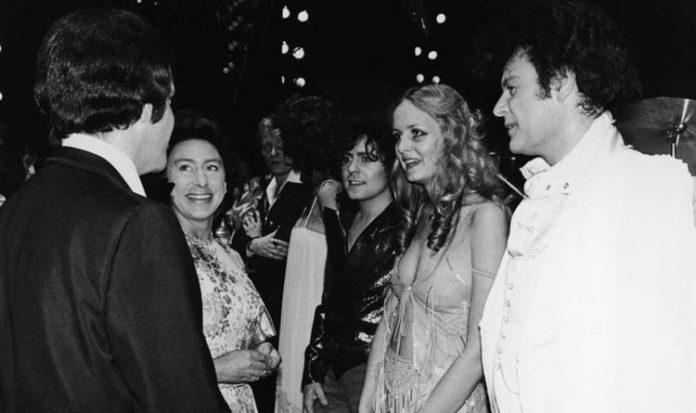 “He told me, ‘It’s about time too’,” she says, while flawlessly impersonating his regal, cut glass accent with all the skills of the actress she has become. “I had met him a few times by that stage,” she adds. “He’s always so charming.” Twiggy – real name Dame Lesley Lawson – was 69 when she accepted the award for her services to fashion, the arts and charity. But her first brush with royalty, some 50 years earlier, was rather less cosy.

It was six months after Twiggy had shot to supermodel fame after being named “The Face of 1966” by the Daily Express.

Then 17, and fresh out of Neasden, she found herself sitting next to Princess Margaret at a glamorous Vogue magazine dinner.

Protocol forbade her from speaking to the Queen’s sister unless addressed first, so a timid Twiggy complied and was duly ignored for two hours. And then, at last, a royal head turned in her direction.

“Prince Margaret asked, ‘What’s your name?’,” she recalls. “I said, ‘My name’s Lesley Hornby, Ma’am, but everyone calls me Twiggy’.

“She just looked at me and said (that accent again) ‘Oh, how unfortunate’. Then she didn’t talk to me again. I was mortified.”

Twiggy with Marc Bolan in the line to meet Princess Margaret (Image: Getty)

Today, it would be impossible to imagine Twiggy being bullied into silence. She’s recently launched a podcast in which she chats away to her showbiz pals.

And on Wednesday, we announced she is one of the judges for the Daily Express’s Brilliantly British Photograph Competition.

Each week, her Tea With Twiggy podcast features a famous friend revealing all about their life and career. Imelda Staunton, Elaine Paige, Christopher Biggins and Lulu are some of the stars lining up for a “virtual tea” so far.

“The first thing I did was ring my darling Joanna Lumley who I’ve known for years because I wanted to do it with someone I knew to feel more relaxed,” she says. “And then I just started calling my mates.”

The idea was conceived last summer after her daughter Carly, from her first marriage to actor Michael Witney, joined her and her girlfriends for a gossip-fuelled lunch.

“We were chatting about all the things that happened in the 1960s and 1970s, and having a good laugh about it,” she says. “At the end, my daughter said, ‘Oh, Mum, you should do a podcast. People would love it.'”

Twiggy lets guests spill the beans and admits it’s been “nerve-wracking” to be asking the questions. But she’s grown into the role.

“Christopher Biggins was hysterical,” she says. “He grew up as an only child and when he was 18 about to leave home, his mum said to him, ‘Christopher, I’ve got something to tell you’ and he said, ‘What Mum?’ She said, ‘Your father and I are expecting another baby.’ He turned to her and told her, ‘Oh, don’t be so ridiculous’.”

She finishes the sentence with a cackle. She would never have dared to be so disobedient at that age. Twiggy may have moved from girlnext-door to international supermodel but she never rebelled. “I was a young 16-year-old in many aspects,” she says. “I’d lived a very ordinary, nice existence. I was very close to my mum and dad, who were grounded and sensible, and lovingly strict. I wouldn’t have done anything to upset them.”

She says the thought of trying drugs “frightened her” more than anything. “Like all teenagers, I tried having a drink at a party and threw up about an hour later,” she says. “That’s the worst thing I ever had.

“The only thing I did was smoke cigarettes because everyone did in those days, but as far as drugs were concerned, I was so straight it was almost like a joke,” she says. “It’s probably why I’m still here.”

There were other dangers lurking in quiet corners of studios and house parties, which we know all about now following the revelations brought about by the #MeToo Movement. But Twiggy says she was always safely accompanied everywhere by her boyfriend, Justin de Villeneuve – 10 years her senior – or another chaperone.

“I was lucky,” she says. “I was completely protected and mainly that’s because my dad said, ‘Well if you want to do this then you’ve got to have somebody with you all the time’.”

She is thankful her father was so careful. “He was a wise old thing,” she says. “I didn’t realise the dangers – the predators that were out there. I was as green as they come.”

Her upbringing was fairly typical. Twiggy was the youngest of three daughters and adored school.

“I was one of those weirdos who really liked it,” she says. “I had really nice teachers and wanted to be a dress designer.”

Her mother, Nell, ran a children’s party catering business but struggled with bouts of depression.

Twiggy recalls: “She wasn’t well some of the time but you learnt to live with that. We looked after her,” she says.

“She was probably bipolar but I don’t think that they knew what it was then.”

She believed that her down-to-earth attitude, instilled by her father, helped her deal with the vicissitudes of celebrity life.

“I’ve met people who are ambitious and want things so much and if it doesn’t happen then it’s a terrible disappointment,” she says.

“Because I didn’t plan what happened, everything was exciting.”

Her initial modelling career only lasted four years, which seems incredible given how those images endured. Her face adorned multiple Vogue covers, she hung out with the Beatles, and Sonny and Cher once threw her a party at which the “King of Cool” Steve McQueen asked her for a dance – and was turned down.

None of it ever went to her head. “I was incredibly shy and insecure,” she says. “I thought I was funny looking. I didn’t think, ‘I’ve got it’. You can see that in my early photographs. It was just this young girl with big eyes.”

She was, perhaps, more shrewd than she lets on. After quitting modelling in 1970, ending her romantic and professional relationship with Justin, she set her sights on acting.

When she promoted the film in LA, studio bosses asked if there was anyone in Hollywood that she’d like to meet. “I said, ‘Oh, my God, I’d love to meet Fred Astaire’,” she recalls. “I was about 21 and he was in his early 70s. They told me it was too difficult as he was already retired and a private man who was no longer seen around Hollywood.”

Two hours later at her hotel, the phone unexpectedly rang. “I was told, ‘Twiggy, you’ve just been invited to tea with Mr Fred Astaire’,” she says.

Prince Charles said ‘about time, too’ as she is made a Dame (Image: PA)

“We had a Mai Tai cocktail each – they’re quite potent actually,” she says. “Afterwards, there were about five of us walking down the street to his car and Fred started to do a little tap dance right there.”

She regrets it was before the era of mobile phones.

“I probably would have captured it,” she admits. “I thought, what if people were driving by on Rodeo Drive? They must have thought, ‘You know, I think I just saw Fred Astaire tap dancing down the street.'”

Twiggy’s proudest moment was her 1983 Broadway debut in My One and Only, which earned her a Tony nomination for Best Actress in a Musical. She has almost no memory of the opening night, thanks to stage fright.

“In my opening number, I have to come down some steps in a little 1920s beaded swimsuit and hat, plus a big feather boa,” she says. “I remember coming down the steps and the next thing I really remember was the applause at the end.”

She believes she was so terrified her brain slipped into autopilot. But there were no slip-ups and she made a new celebrity friend.

Prince Charles and Twiggy backstage at the London Coliseum in 1982 (Image: PA)

“Sir Laurence Olivier was in the audience, along with all the glitterati of New York,” she says. “We had dinner afterwards. I have got a very beautiful handwritten note that I treasure from him.”

Given her career highlights, it must rankle a little her most talked about years remain her teenage ones. “Sometimes you think, ‘Oh, for God’s sake, don’t bring up the Sixties again’ because I’ve been there, done that, got the T-shirt. But I understand that was a special moment in time for me and it’s what people remember.”

Would she ever cut her hair that short again now? “Never,” she says. “You have to be very young to have it that short. Even then I was hankering to get it long again.”

She’s looking forward to Christmas with husband Leigh and the family and she’s furiously knitting things for “little people”.

She is also midway through watching series four of The Crown on Netflix. “I love it,” she says emphatically. Well, the producers still have plenty of time to include that exchange with Prince Charles.