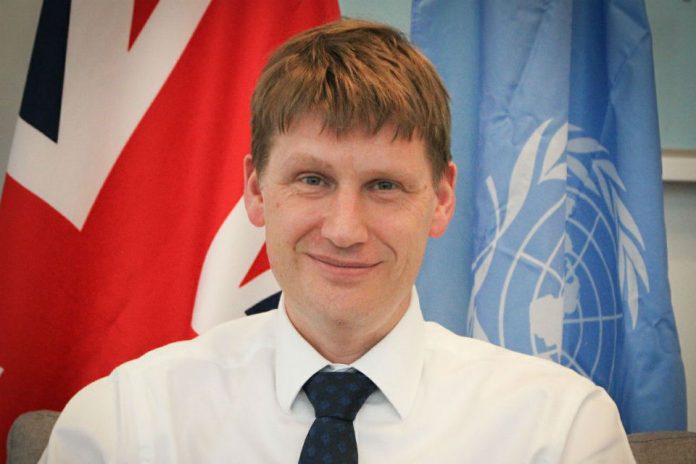 Thank you very much, Mr Chair.

I’m just going to start, if I might, by saying to you, Vassily, that I thought it was disappointing that Russia only confirmed today to members of this Council the identity of your briefers. I felt that treated the Council with disrespect and there was no need to do so unless, I suppose, perhaps you were hoping to secure other briefers.

But I want to say that we fundamentally disagree with the distorted narrative set out in the concept note and by today’s briefers.

In the concept note, the organisers have sought to present as fact various unfounded and untrue propositions that Syria completely destroyed its chemical weapons programme in 2014; that Syria has not used chemical weapons since then; that any claims that they have are part of some kind of Western plot; and that the OPCW, the United Nations, and their reports are biased, lack integrity or are rife with malpractice.

By doing so, colleagues, the organisers want you to discount, doubt and disbelieve the evidence before your eyes. And they want you, in a small way, to become complicit in protecting the Assad regime from accountability for atrocities committed against the Syrian people.

But I think its worth reminding ourselves of the actual evidence, facts, that have been presented to us by the United Nations and the OPCW over the past seven years.

So, in seven years, the Syrian authorities have still failed to provide a complete and consistent declaration of their chemical weapons programme, as required by Security Council resolution 2118 and the Chemical Weapons Convention, as required by international law.

The OPCW Director General has made clear that there remain serious, outstanding gaps and inconsistencies in Syria’s chemical weapons declaration. The fate of more than 400 tonnes of chemical weapons agents and precursors and thousands of munitions are unclear.

Furthermore, since the initial declaration, the OPCW-UN Joint Investigative Mechanism and now the OPCW’s Investigation and Identification Team, have found the Syrian authorities responsible for using chemical weapons on no fewer than seven occasions, including in Khan Sheikhoun and Ltamenah in 2017.

The OPCW has presented evidence in thorough and methodical reports. The first IIT report sets out the details of an exhaustive and rigorous nine-month investigation. The report was clear on its methodology, the evidential standard applied, and the wide range of scenarios considered, and the reasons for accepting or discounting them. The IIT simply found that there was no evidence to support other explanations, such as those offered by Syria and Russia.

Now, colleagues, it’s important to bear in mind that neither the Russian Federation nor their Syrian clients are unbiased actors without an agenda. Both have recently used chemical weapons – the Syrians extensively in their own country against their own people, and the Russian Federation in a failed assassination attempt in the United Kingdom, which tragically led to the murder of a British citizen. And Russia has grave questions to answer about the attempted assassination of Alexei Navalny with a nerve agent last month.

It’s against this backdrop they have attempted to undermine the OPCW and the international architecture designed to prevent the use of these abhorrent weapons.

We have been presented with so-called evidence of OPCW malpractice by individuals who were not fully party to investigations, could not accept that their views were not backed by the evidence, and who then breached the confidentiality obligations to the OPCW.

We have been presented with the results of investigations by so-called independent Russian NGOs, such as the Foundation for the Study of Democracy, with questionable or nonexistent expertise in the analysis of chemical weapons attacks. These presentations include various unconvincing theories about canisters, apertures, trays of glasses, and the strength of beds.

We have been subjected to lengthy conspiracy theories from journalists, whose Twitter feed reveals all the Council members need to know about the supposedly independent nature of their reporting, and from academics, whose theories have been dismissed by their better-qualified peers. We are told every month by Russia that the IIT findings cannot be trusted because the decision to create it was “controversial”, despite it being created in full accordance with the Chemical Weapons Convention. We have been told it’s untrustworthy because it’s geographically imbalanced, despite its members coming from all geographic groups and in any case acting as independent professionals.

Various inconsistent positions have been put forward regarding individual incidents. For example, Syria and Russia have repeatedly changed their story about Khan Sheikhoun. First, they claimed there had been no release of toxic chemicals in Khan Sheikhoun. Then they claimed that inadvertently hit a terrorist chemical weapons dump, creating toxic chemicals which were not sarin. Then Syria finally handed over samples and admitted that sarin was released, but said it was someone else who did it. The IIT report highlights the fact that the sarin used in attacks on Khan Sheikhoun in Ltamenah matched the declared Syria stockpile and analysis showed it was Syria’s own sarin.

Indeed, on the fifth of July 2017, the Russian Ambassador to the OPCW, Alexander Shulgin, said, after reviewing the report on the incident in Khan Sheikhoun, only one thing is clear – either sarin or sarin-like substance was in fact used there. And yet at the Open Syria CW briefing on the 10th of September this year, Vassily Nebenzia said, “the use of sarin, in that case, was even more than questionable”.

The Russian playbook, colleagues, is to throw mud in all directions and see what sticks. They undermine independent expertise for their own self-interest. Don’t let them do it.

Over the past seven years, the OPCW has worked tirelessly to assist Syria with resolving the outstanding issues in its declaration. Through its fact-finding missions, it has investigated incidents of chemical weapons use and has been tasked first by the Security Council as part of the Joint Investigative Mechanism, and subsequently by the Executive Council, to carry out the important task of identifying the perpetrators of chemical weapons use.

While carrying out these vital tasks, the OPCW has found itself under sustained attack, including an attempted Russian GRU cyber-attack in 2018. Rather than use its privileged platform to persuade its Syrian clients to resolve the gaps and inconsistencies in their chemical weapons declaration and to stop using these weapons, Russia simply attempts, as today, to discredit the OPCW in its multinational staff.

Colleagues, the awful poisoning of Russian opposition politician Alexei Navalny by Novichok, a banned chemical weapon, reminds us of the importance of the OPCW and the importance of a nonproliferation regime. It is unconscionable that any government can even think of using chemical weapons against its own people or indeed against anyone else. The Syrian regime has repeatedly shown it is willing to do so.

Members of this Council have a particular responsibility to protect the nonproliferation regime and to ensure these abhorrent weapons and not use with impunity. We owe it to the victims and to potential future victims to realise this responsibility and to act on the basis of moral principles.

Thank you very much, Mr Chair.