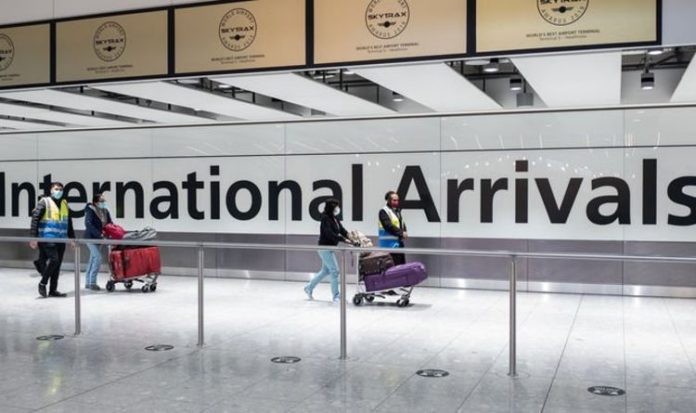 Anyone arriving from 33 red-list countries, such as Brazil, Portugal and South Africa must now isolate in selected hotels for 10 nights. They also have to complete a ­coronavirus test on the second and eighth day after arrival. Ministers insist the measures are vital in preventing new variants of Covid-19 spreading through the UK. Some passengers were able to ­circumvent travel bans on South America, Portugal and southern Africa by first flying to countries not on the UK’s red list, such as Spain.

This meant they were mixing with passengers on the two-hour flight from Madrid. But arrivals from Spain are not required to isolate in a hotel for 10 nights, prompting fears they could be spreading the disease on public transport.

In Scotland, the rule to stay in a hotel applies to travellers from all countries – rather than just those from the list of 33 countries.

Wagner Araujo, 43, arrived at Heathrow via Madrid with his wife Elaine, 40, following a trip to Brazil.

They were among dozens of passengers who arrived by coach at the four-star Radisson Blu Edwardian after touching down in the UK.

The Government has booked nearly 5,000 rooms for passengers coming from high-risk countries to quarantine in. Health chiefs are ­concerned the vaccine may be less effective against the Brazilian and South African mutations.

Wagner said: “The system is ­ridiculous. It doesn’t make sense. I was on the flight from Madrid ­surrounded by other passengers who were not from red-list countries.

“How can that be a good way to prevent coronavirus from spreading? We are all mixing on the plane and then I’m made to quarantine.”

Elaine added: “There were mainly British people on the flight back from Madrid. We were all in a queue together waiting to board the flight and were sitting right beside them.

“While we were waiting to get off the plane, we were all in the same queue, shoulder to shoulder. It’s insane and I don’t understand it.”

Wagner revealed they were only separated from other passengers once they had disembarked at Heathrow and were sent to a special immigration counter for those ­arriving from red-list countries.

He said: “It makes a bit of a nonsense of the whole thing as anyone on my plane who is flying from Paris doesn’t have to be quarantined, despite being ­surrounded by connecting travellers from Covid-risky countries.”

Londoner Zari Tadayon, 66, from north London, said she had flown in from Dubai, in the red-listed UAE, via Frankfurt. She said there was no keeping people apart at the airport.

She added: “We walked towards immigration and were very close to other people. I didn’t book a hotel. I have some health problems. I thought I would have an exemption, I could self isolate at home.”

The Prime Minister’s spokesman defended the arrangements, stating the Government is “working closely with airlines and carriers who are ensuring that the flights they provide are Covid-secure”.

Yvette Cooper MP, chair of the Home Affairs select committee, said: “The Government is at risk of undermining its quarantine ­policy if passengers from high-risk countries mix with everyone.”

She said most passengers and staff then travelled home on public ­transport yet there were no tests at the airport. She added: “The whole point of these measures is to prevent new variants from spreading – but that won’t happen if there are still too many holes in the system.”