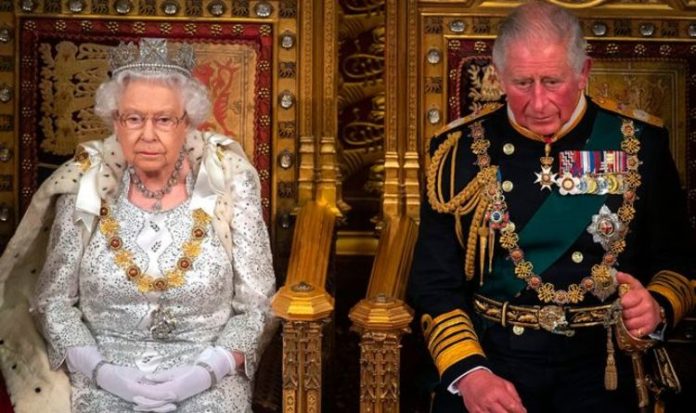 The Queen has remained committed to her role for nearly 70 years and has continued to dutifully carry out her engagement despite her age and a series of crises that have rocked the Royal Family over the past few years. Prince Charles and Prince William have increasingly stepped up and taken on more duties to help Her Majesty to keep on delivering on her crucial mantra of “being seen to be believed”. But despite the Queen signalling her unwillingness to abdicate, royal commentator Luisa Ciuni suggested she may soon opt to make Charles her Regent and give up nearly all her duties.

Speaking to Tv2000, Ms Ciuni said: “The Queen, given her age, can continue to do this job mainly because she has a very strong family staff.

“Part of her office work is now done by Prince Charles, to whom the regency will go sooner or later.

“The role of Prince Charles has shifted to his son, William, and his wife. But she does everything else.

“This…allows her to continue doing everything she does morning, afternoon and evening.”

As a Regent, the Prince of Wales would assume the majority of the Queen’s duties but would still have to wait for Her Majesty’s death to be crowned king in his own right.

The UK was last placed under a regency during one of George III’s last bouts of illness, forcing his eldest son George Augustus took over between 1811 and 1820.

The current rules regulating the role of a Regent were set out in the 1937 Regency Acts, which would enable the Queen to pass on the majority of her roles to an appointed member of the Royal Family.

“I think it’s very unlikely that she will abdicate.”

Aged only 21, the Queen pledged to remain on the throne for as long as she would live – sending a clear signal to British and Commonwealth citizens that she would not spark a new constitutional crisis as her uncle, Edward VIII, had when he abdicated in 1937.

Her Majesty said: “I can make my solemn act of dedication with a whole Empire listening. I should like to make that dedication now. It is very simple.

“I declare before you all that my whole life whether it be long or short shall be devoted to your service and the service of our great imperial family to which we all belong.

“But I shall not have the strength to carry out this resolution alone unless you join in it with me, as I now invite you to do: I know that your support will be unfailingly given. God help me to make good my vow, and God bless all of you who are willing to share in it.”