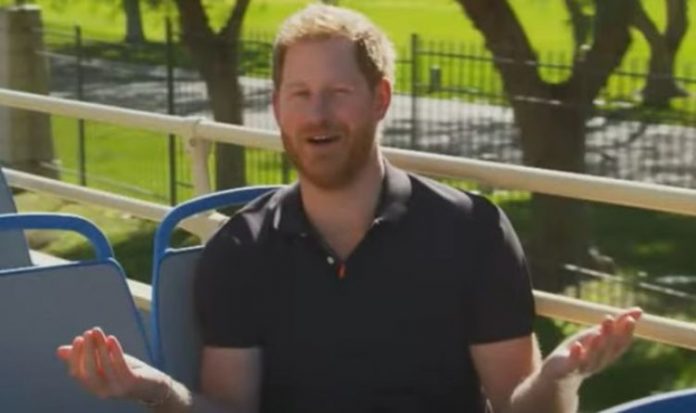 The Queen and Prince Philip have seen their great-grandson, Archie Harrison, “running around” over virtual calls, according to Prince Harry. The Duke of Sussex spoke about his contact with his family back in the UK while being interviewed by TV show host and longtime friend, James Corden. Harry also shared a funny anecdote about his grandfather’s use of video chatting.

Harry went on to offer an amusing insight into the Duke of Edinburgh’s technical skills.

He revealed that the senior royal prefers to just completely shut his laptop, rather than just exiting the Zoom app.

Harry laughed: “My grandfather, instead of pressing ‘leave meeting’, he just goes boom.

Harry told James: “She sent us a waffle maker for Archie.

“For breakfast now, Meg makes up a beautiful organic mix, and he loves it.”

The TV show host interrupted, adding: “You’re glossing over the fact that I cannot, for the life of me, imagine the Queen ordering a waffle maker to be sent to Santa Barbara.

“I can’t get my head around that.”

Harry laughed in response: “I don’t even know how to comment on that.”