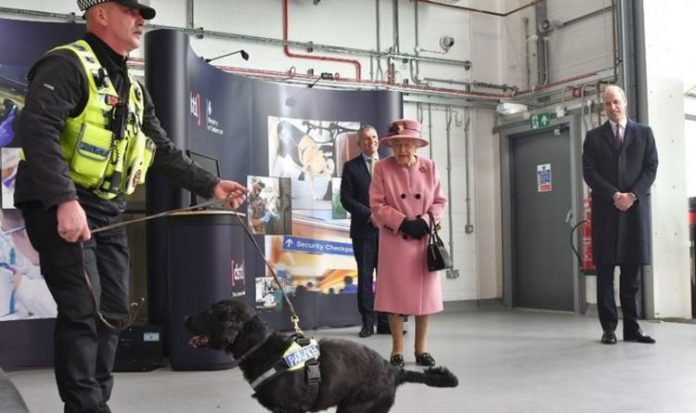 The 94-year-old monarch was back to business as she carried out her first public engagement outside a royal residence since the coronavirus pandemic gripped the nation. She was joined by her grandson the Duke of Cambridge at the Defence Science and Technology Laboratory at Porton Down near Salisbury, meeting scientists providing vital support in the UK’s response to the COVID-19 outbreak.

But the pair have come under fire for not wearing face masks during the visit.

Paul Dale tweeted: “How extraordinary that the Queen and William should be out and about without masks.

“And since the royals never do anything by accident, I assume it’s a deliberate snub.”

Royal author Omid Scobie commented: “While sensible and safe precautions were clearly made, I do worry that most people seeing the photos/videos won’t know the back story.

“As the majority of the UK enters tighter restrictions, seeing leaders in masks would have been a strong visual.”

Meanwhile anti-monarchy group, Republic tweeted: “Is that how the rules work?”

It is understood the monarch and William did not wear a face covering as it was an outside engagement and all 48 people who were due to come into close contact with them were tested for COVID-19 beforehand and all came back negative.

Kensington Palace declined to comment as to whether William was also required to have a test in order to be able to accompany his grandmother.

The second in line to the throne and the Queen, who previously would have been side by side, walked two metres apart as they were greeted by staff.

The Queen also arrived by helicopter separately from the duke, who travelled by car.

Small groups of those taking part in the royal visit were arranged two metres apart for social distancing.

A Buckingham Palace spokeswoman said: “Specific advice has been sought from the medical household and relevant parties, and all necessary precautions taken, working closely with the Defence Science and Technology Laboratory.”

The Salisbury engagement comes amid a resurgence of the virus, with the country battling a second wave and stricter restrictions in place in some areas.

The royal pair were also introduced to staff involved in the rapid response to the Novichok poisoning attack in Salisbury in 2018.

The Queen was last at an official public engagement outside of a royal residence when she joined the Royal Family for the Commonwealth Day service at Westminster Abbey on March 9.