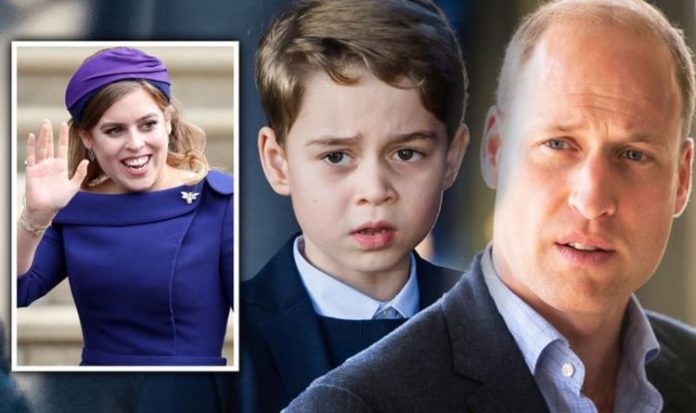 Princess Beatrice, 32, is Queen Elizabeth II‘s granddaughter and the eldest child of Prince Andrew, 60, and Sarah Ferguson, 60. Beatrice is a non-working member of the Royal Family and while she and her sister Eugenie, 30, are regulars at royal events they are not senior members of the Firm.

Nonetheless, an extraordinary set of circumstances could, in theory, lead to Beatrice becoming Queen.

Prince Harry has kept his place as sixth in line to the throne despite his decision to quit as a senior royal.

He is expected to move up to fifth in line to the throne when his father Prince Charles becomes king at which time Harry’s son Archie Harrison will move up to sixth in line.

The line of succession has traditionally been protected by a royal custom that sees heirs to the throne travel separately when going by helicopter or plane.

The custom is meant to ensure the survival of one heir if the other plane or helicopter were to be involved in a fatal accident.

The protocol was put in place at a time when air travel was far more dangerous than it is today and nowadays Prince William has been known to travel together with Kate and their three children.

However, what would happen to the line of succession if the Cambridges were tragically killed in a helicopter or plane crash was a pertinent question recently put to royal expert Camilla Tominey.

The expert added: “As you correctly point out, Prince Harry is the next in line to the throne after Prince Louis, so theoretically he would inherit the Crown from his father Prince Charles.

“The question, following Megxit, is whether he would actually want to?

“Meghan appears to be enjoying her new-found freedom to speak out.

“Plus they have just bought a house in Santa Barbara and intend to bring Archie up there.”

Ms Tominey concluded: “There is, therefore, an even more frightening prospect than the Cambridges all being wiped out in a helicopter or plane crash: Harry relinquishing his place in the line of succession – along with Archie’s – thereby leaving the Duke of York to become the next King!

“If he then passed up the chance, we could be looking at Queen Beatrice I.

“Do you want to write to Kensington Palace warning of the dangers of air travel, or should I?!”

Princess Beatrice has recently returned from her honeymoon with husband Edoardo Mapelli Mozzi, the couple are understood to have travelled to France following their low-key wedding in July.