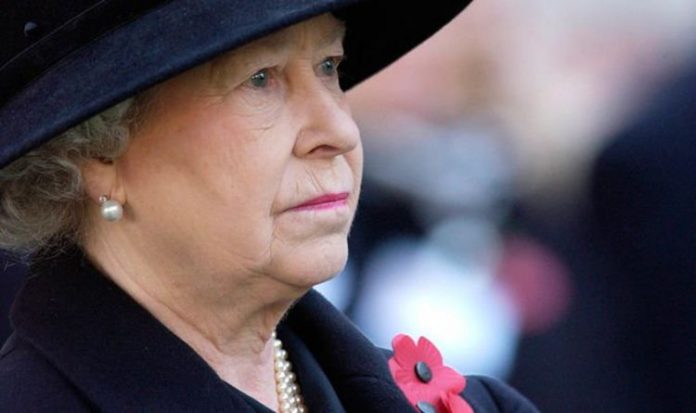 The Queen marked the 100th anniversary of the burial of the Unknown Warrior at Westminster Abbey just hours before the second lockdown in England began. The monarch was photographed yesterday quietly leaving Windsor Castle in the back of her car.

The Queen was in a sombre outfit, donning sunglasses and a black dress.

As revealed by the Court Circular, the royals’ official register of engagements, the monarch was heading to London for her first duty in the capital since the beginning of the first lockdown.

The entry in the register, dated November 4, read: “The Queen this morning commemorated the Centenary of the burial of the Unknown Warrior at Westminster Abbey, London SW1, and was received at the Great West Door by the Dean of Westminster (the Very Reverend Dr David Hoyle).”

The Unknown Warrior was buried at the Abbey on November 11 1920 in the presence of the Queen’s grandfather – King George V.

Later in the evening, the Queen also carried out her weekly meeting with the Prime Minister, the Court Circular confirmed.

A second entry registered under the same date read: “The Rt Hon Boris Johnson MP (Prime Minister and First Lord of the Treasury) had an audience of Her Majesty via telephone this evening.”

The second lockdown in England started overnight, at 00.01am, and is set to last until December 2.

The Queen is set to spend the next four weeks at Windsor Castle with her husband Prince Philip and a small staff, dubbed HMS Bubble.

The Queen, however, is expected to leave self-isolation on Sunday to join other royals at the Cenotaph in London.

There, they will attend the National Service of Remembrance, with the Queen likely overlooking the ceremony from one of the balconies of the Foreign and Commonwealth Office in Whitehall.

Prince Charles, as he has done for the past three years, is to lay a wreath at the Cenotaph and lead the country in a two-minute silence.

This year’s ceremony at the Cenotaph will be socially-distanced and closed to the public due to the coronavirus pandemic, with veterans and Britons invited to mark the key day in the safety of their homes.

The Queen hasn’t been the only member of the Royal Family to head to Westminster Abbey this week.

The Duchess, patron of the Poppy Factory who has been creating the Field for the past 92 years, planted a small wooden cross before bowing her head and paying tribute to the fallen as the Last Post was played.