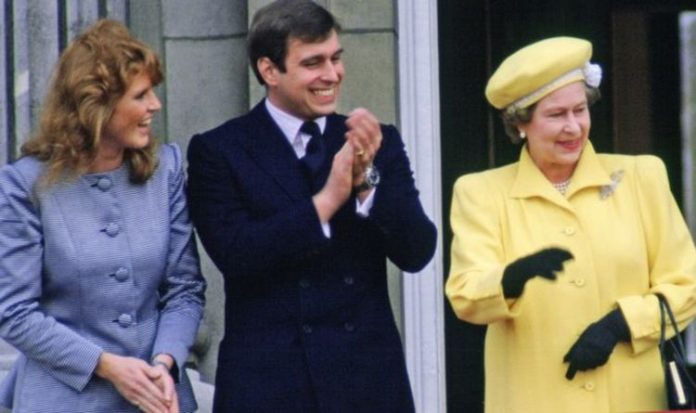 The Queen showed that she was Sarah Ferguson’s “most significant champion” when she visited the Duchess of York in hospital following the birth of Princess Eugenie in 1990. The monarch’s actions were unprecedented and revealed her deep fondness for her daughter-in-law and Prince Andrew. Royal commentators discussed the births of Fergie’s two royal children on Channel 5 documentary, ‘When Fergie Met The Monarchy’.

Narrator Glynis Barber told viewers: “Despite Fergie’s problems within the Palace, her place within the Windsor family was strengthened when she gave birth to Princess Beatrice in August 1988.

“The new baby was the fifth in the line to the throne.”

“It kind of cements the relationship between the in-laws, in this case the Fergusons, and the royals.”

“She became sixth in line to the throne.

“Sarah had given the Windsors their first royal princesses since Princess Anne’s birth.

“Her most significant champion, the Queen, even came to visit the Duchess in hospital.”

Biographer Ingrid Seward gave insight into the Duchess’ relationship with her mother-in-law.

She told Channel 5: “The Queen is the one person who remained steadfastly loyal.

“She absolutely loved being in the company of her daughter-in-law far more than she liked being with Diana.

“Fergie could do everything that Diana couldn’t do.”