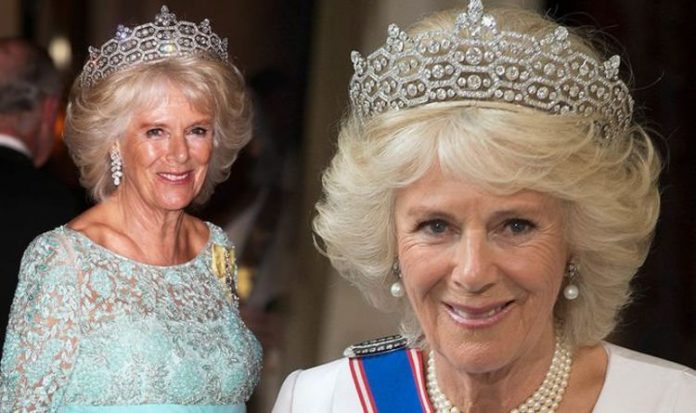 Camilla has been a working member of the Royal Family since she married Charles in a civil marriage at Windsor Guildhall in 2005.

She received her Duchess of Cornwall title upon her marriage.

Instead of being known as Princess of Wales, she uses her husband’s secondary designation.

In Scotland, she uses the title of Duchess of Rothesay.

Camilla is expected to become princess consort rather than queen consort.

Before the couple were married, Clarence House announced: “It is intended that Mrs Parker Bowles should use the title HRH The Princess Consort when The Prince of Wales accedes to The Throne.”

Customarily, the wife of the king would become queen consort, but according to Slate the decision to use the princess consort title for Camilla was “created just for Camilla because crowning her as queen would create PR problems for the royals.”

A spokesperson told the Times: “The intention is for the duchess to be known as princess consort when the prince accedes to the throne.

Prince Charles, however, is reportedly pushing for Camilla to adhere to tradition and become queen consort.

Speculation about Camilla taking on this new title was renewed in 2018 when Clarence House’s official website removed a statement that said she would be known as Princess Consort.

On the website’s FAQ section the question “Will the Duchess become Queen when The Prince becomes King?” was removed when the website was revamped.

But Clarence House has insisted its omission only means it is no longer a popular topic.

The statement to the Daily Star read: “Our frequently asked questions are updated regularly. This is one question (we have) not been asked by the public for some time, which is why it no longer features.”

Support for Camilla to become Queen has increased in recent years as royal watchers have argued for her growing importance within the Firm.

She has been especially praised for her continued devotion in the wake of Prince Harry and Meghan Markle’s departure from royal life.

Last year, Camilla was ranked as the eighth most popular royal in a YouGov poll, which improved greatly on her typical standing.

“She is a hardworking, kind and dedicated member of The Royal Family.

“The backlash against Camilla is unfair and unfounded.

“She has an excellent relationship with The Queen, William and Harry and young Prince George, Princess Charlotte and Prince Louis.

“But most importantly she has an amazing relationship with Prince Charles. Charles and Camilla will be an excellent King and Queen.”

Although she is not expected to actively use the queen consort title, Camilla will be the Queen Consort in the legal sense as she will be the wife of the king.

A spokesperson for the University College London’s constitutional unit told The Times: “Prince Charles will no doubt have regard to public opinion at the time of his accession, in deciding whether Camilla should become queen; and he may also want to seek the advice of the government of the day.”

Professor of public law at the University of Oxford, Pavlos Eleftheriadis, told Daily Star Online: “Camilla will be a ‘Queen’ in the limited legal sense of being the wife of the sovereign, or ‘Queen Consort’.”

Professor Eleftheriadis added: “She cannot be forced to be called ‘Queen Consort’, but her role as the wife of the King is, by definition, that of Queen.

“This is, however, a very limited role, which need not involve the use of the title ‘Queen’.”