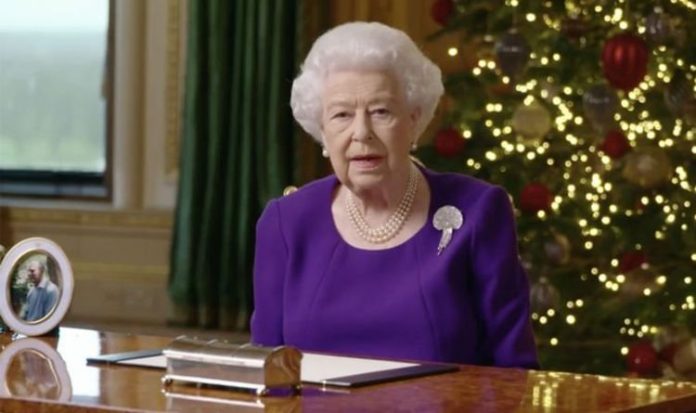 The Queen of England and Duke of Edinburgh have been married for an admirable 73 years. The royals tied the knot at Westminster Abbey 1947. It seems time has only strengthened their bond as a photograph of the Duke took pride of place during the Queen’s televised speech.

As usual, the monarch paid tribute to her own family as well as her people, as she placed the sweet photo of her husband the Duke of Edinburgh beside her.

In this year’s Christmas Day speech, the monarch reflected on the past year and spoke of her pride in the nation.

She said: “In the United Kingdom and around the world, people have risen magnificently to the challenges of the year, and I am so proud and moved by this quiet, indomitable spirit.

“To our young people in particular I say thank you for the part you have played.”

She also sent a sweet message in homage to The Queen Mother as she addressed the nation.

The Queen chose to wear the Courtauld Thomson Scallop-Shell Brooch, which was a favourite piece of the her late mother’s.

The royal is said to have been gifted the diamond-studded and pearl pin by writer Winifred Hope Thomson in 1944.

She was the sister of Sir Courtauld Thomson, who designed the pretty brooch.

The Queen also chose to wear the brooch to unveil a statue of her mother near Buckingham Palace in 2009.

In this year’s speech, the 94-year-old praised acts of kindness, saying the pandemic “brought us closer” despite causing hardship.

The Queen, like so many, is spending the day apart from her family.

“Remarkably, a year that has necessarily kept people apart has, in many ways, brought us closer,” the monarch said in the broadcast.

“We continue to be inspired by the kindness of strangers and draw comfort that even on the darkest nights there is hope in the new dawn,” she said.

Referring to the centenary of the Unknown Warrior’s burial in Westminster Abbey, she said: “The Unknown Warrior was not exceptional, that’s the point. He represents millions like him who, throughout our history, have put the lives of others above their own and will be doing so today.

“For me, this is a source of enduring hope in difficult and unpredictable times.”

This year’s message was recorded in mid-December with a pared-back film crew and in accordance with Government guidance.