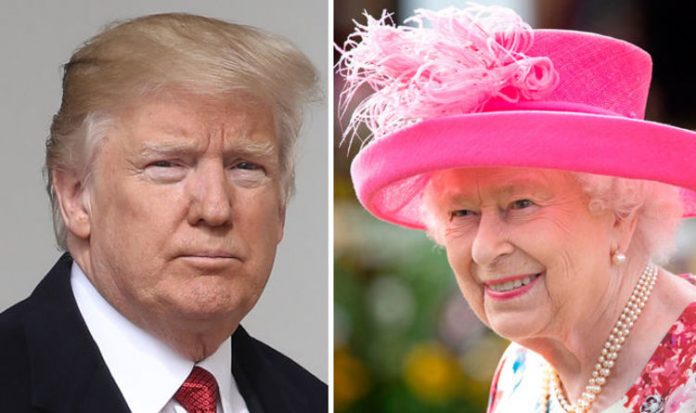 The President visited the UK on a three-day working trip but managed to meet the Queen and even spent twice as long with her than he thought he would.

Speaking after the 45minute meeting the President claimed he got on “famously” with Her Majesty and said she was a “fantastic, beautiful woman”.

When asked if they talked about Brexit, he said: “I did. She said it’s a very – and she’s right – it’s a very complex problem, I think nobody had any idea how complex that was going to be.

“Everyone thought it was going to be ‘Oh it’s simple, we join or don’t join, or let’s see what happens’.”

The President was asked if she gave her opinion on Brexit, but then he became cagey.

Writing in the Mail, Piers Morgan reveals Trump replied: “Well, I can’t talk, you know I’ve heard very strongly from a lot of people, you just don’t talk about that conversation with the Queen, right?

“You don’t wanna do that… Let me tell you what I can talk about.

“She is an incredible woman, she is so sharp, she is so beautiful, when I say beautiful – inside and out. That is a beautiful woman.”

Trump caused controversy this week after an interview with The Sun in which he attacked Theresa May for watering down Brexit.

He claimed it might kill off hopes with a trade deal with the US, saying: “I actually told Theresa May how to do it but she didn’t agree, she didn’t listen to me.

“She wanted to go a different route.

“I would actually say that she probably went the opposite way. And that is fine.

“She should negotiate the best way she knows how.

“But it is too bad what is going on.”

The firebrand Republican tried to row back on his criticism during a joint press conference with Theresa May on Friday.

Mrs May finally reached a “collective” agreement on the basis of the future relationship between the UK and the EU at Chequers last week.

However, leading Eurosceptics Boris Johnson and David Davis resigned as a result of the agreement on Monday.

The agreement has been condemned by Brexiteers for being “too soft”, with some arguing it fails to respect the result of the 2016 referendum result.