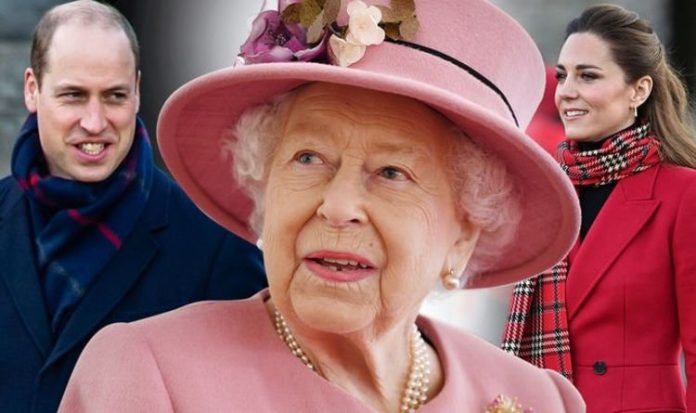 The Royal Family had a tumultuous year in 2020, which saw the departure of Prince Harry and Meghan Markle as well as a heated debate over the content of Netflix’s The Crown, which reignited divides regarding the treatment of Princess Diana. The Queen and Prince Philip have spent much of 2020 holed up in Windsor Castle together – a marked change to their usual schedule where the Duke of Edinburgh spends much of the year at his cottage in Sandringham.

But as the pair were both in the ‘at risk’ category amid the ongoing coronavirus pandemic, it was decided the two would join together in self-isolation.

The outbreak – and exit of Meghan and Harry from the Firm – has seen many of the younger royals step up to take on extra royal duties this year.

Kate, Duchess of Cambridge and Prince William took on a slew of royal duties, including a tour of the UK in support of health care workers.

While Sophie, Countess of Wessex has also stepped up her royal responsibilities in a sure sign of the faith the Queen has in her daughter in law.

Exactly what this means is unclear at this stage, given that plans for royal duties have not been outlined to the public and it’s likely the royals will be kept indoors like the rest of us well into 2021 as coronavirus continues holding its firm grip on the UK.

Elsewhere, big changes are apparently in store for other royals, including Prince William who will apparently “re-evaluate his role and values in life, eliminating what is no longer relevant”.

While his wife Kate will also undergo a “radical change to her pattern of life, requiring a whole re-organisation of the way she works.

Prince Harry and Meghan Markle will continue to push forward with their lives in America.

DON’T MISS
Royal calendar: All the royal milestones to come in 2021 [INSIGHT]
Royal milestone: 2021 to see William & Harry reunite for sad occasion [REPORT]
Will the Queen be vaccinated against Covid-19? [ANALYSIS]

According to Ms Frank: “Meghan’s 2021 continues her push to establish a huge role in the world.

“She will forge partnerships with organisations that give her a powerful platform, yet there are complications that filter through into her relationship with Harry.

“From May onwards her knack of surprising us all will come to the fore.”

Unlike his brother and sister-in-law, Harry will not be taking on the same responsibilities and is apparently in for a trickier year.

The analysis continues: “Harry is floating in a world cut off from the rigid protocols of his previous life.

“Although it gives him space, he is likely to feel disappointed at times, without that clear cut definition of his identity whilst he finds his feet.

“He is going through a period of drifting this year as the initial excitement of letting go of old restrictions wears off.”

2021 is also full of milestones for the family, including new members and big celebrations due throughout the year.

Princess Eugenie is expected to give birth to her first child with husband Jack Brooksbank within the first few months of the year, having announced her pregnancy in September.

Her cousin Zara Tindall will also welcome a new family member, with the equestrian currently pregnant with her third child with husband Mike Tindall.

The couple, who married in 2011, already have two daughters, Mia, six, and Lena, two.

A huge birthday is on the cards for Prince Philip, who is due to celebrate his 100th birthday on June 10.

Currently, no public plans have been made for the prince’s birthday.

March 2021 will mark 12 months since Prince Harry and Meghan Markle officially stepped down from their royal duties.

The review is expected to consider key questions including if their Royal Highnesses will keep their HRH status and if they should resume any official duties on behalf of the Crown.