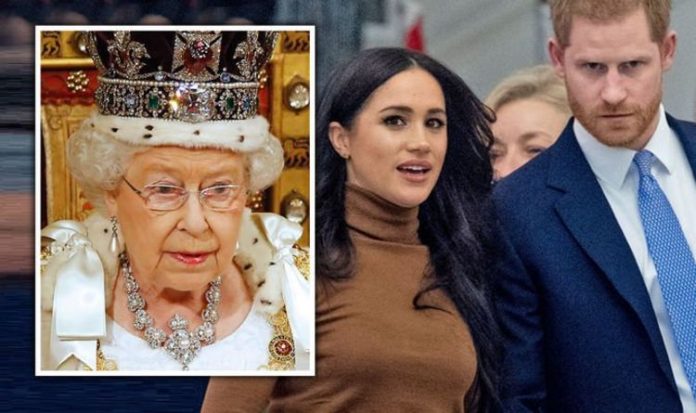 The E! News host said: “I can’t give exact examples but, obviously, they’ve detached themselves from the Royal Family and in the times we’ve spoken about them since they’ve been in LA, there have been some small requests they’ve asked for.

“It’s been sort of like, ‘ok, we can accommodate, we’re figuring our way.’ This was the first blatant…this is the line.

“You’re not senior members of the Royal Family anymore, enough. We’re not catering for you, you live in Santa Barbara, you’ve got rich, famous neighbours, you want to focus on other things.”

Ms Stewart continued: “We’re not doing things on behalf of you, you either show up like you’re supposed to do, or you’re not a part of it.

“It was kind of nice to see, finally, the line is drawn. We’re not just always going to extend something out for you, you’ve made this decision and now we’re following suit and respecting that.”

The Duke and Duchess of Sussex ultimately marked Remembrance Sunday with an intimate wreath-laying ceremony at the Los Angeles National Ceremony, where they paid tribute to two Commonwealth soldiers.

E! News co-host Kym Whitley however criticised the Queen’s decision, suggesting the Royal Family could be excluding Harry and Meghan as they previously did with Her Majesty’s uncle, King Edward VIII.

The former king opted for abdication in 1936 after the Government rejected his demands to marry his American divorcee lover, Wallis Simpson.

Ms Whitley also defended Prince Harry’s decision to step back from his official roles earlier in the year after both the Duke and Duchess of Sussex admitted to struggling with the pressure facing them after their marriage.

She added: “You also have to remember why he made the decision. They were really mean to his wife and his child.

“He didn’t make the decision because he didn’t just feel like being part of the family. He had to make an executive decision for his family.”

Prince Harry and Meghan Markle officially stepped down as working members of the Royal Family in March and are unlikely to resume their duties once the one-year trial agreed with the Queen ends in 2021.