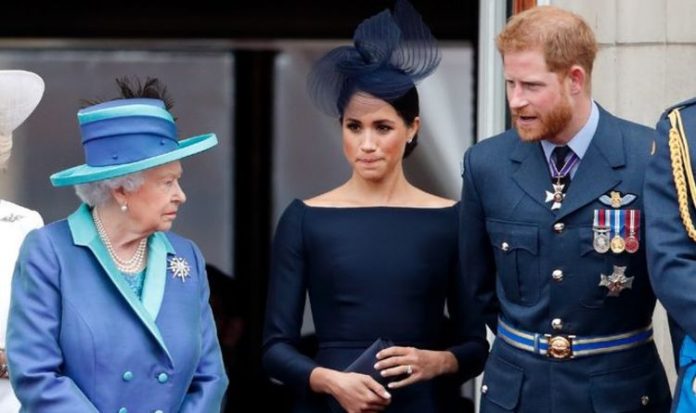 A new unauthorised biography about Prince Harry and Meghan Markle’s time in the Royal Family has raised some “fascinating” revelations. The book, ‘Finding Freedom’, claims that the Duke and Duchess of Sussex set in motion plans for ‘Megxit’ during their time off in Canada and notified the Queen and Prince Charles by email. Royal commentators Katie Nicholl and Emily Andrews joined Channel 5 documentary, ‘Meghan & Harry: The New Revelations’, to speak about the insights offered.

Ms Nicholl told viewers: “The book claims Harry thought he was being blocked from a meeting with the monarch, which led to an extraordinary plan.

“One of the most fascinating and new revelations from the book is when they landed in the UK from a sabbatical in Canada they considered detouring straight to Sandringham to try and get a meeting with the Queen.”

Ms Andrews added: “If they had done that, I think the Queen would have been quite shocked and surprised.

“Frankly that’s not the way things are done.”

She continued: “I think that’s a lot of the problem here.

“Harry and Meghan didn’t want to keep doing things the way they are done.

“The monarchy wasn’t going to change things just for them.

“The monarchy’s a supertanker, it just keeps on going and ploughing its own furrow.”

After the meeting, the Queen released a statement granting her full support to the Sussexes as they forge their new life.

The couple announced initial plans to split their time equally through the year between the UK and Canada.

However, before travel restrictions were implemented, they moved with their son Archie to California to wait out the pandemic.