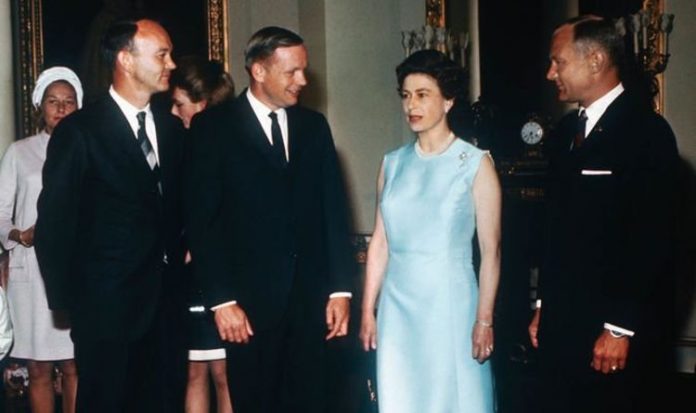 The Queen hosted the first crew to step on the Moon 51 years ago at Buckingham Palace. And her hospitality, as well as the links between Washington and London, has been celebrated by Dr Aldrin, who published today a picture of the monarch surrounded by the three crew members who travelled to Earth’s satellite in July 1969.

The picture shows the Queen in a sleek turquoise dress standing next to Neil Armstrong, Michael Collins and Dr Aldrin.

“We had the unique opportunity and pleasure to spend some time in London’s Buckingham Palace with Queen Elizabeth II.”

The astronaut didn’t just mention his visit to the palace but also spoke of the long-lasting relationship between the US and the UK.

“Both you guys were Towering Figures at Buckingham Palace with Queen Elizabeth. Hip-Hip-Hooray!”

Lisa added: “Lucky you. You got to meet the Queen! Thanks for sharing the photo!”

And Twitter user with the nickname The Bloodstone wrote: “Outstanding Buzz! Thanks for sharing”.

Others recalled this event portrayed in the third series of Netflix’s The Crown, which focused on fictional Prince Philip’s fascination for the Apollo 11 crew and their work.

Bondi wrote: “Hi Buzz, how true was the Netflix ‘The Crown’ scene depicting your talk with Prince Phillip? I assume you’ve watched the scene in question?”

Jerry added: “It was also kind of captured on Netflix’ The Crown! Insightful all around, commander.”

The three astronauts carried out a world tour between late September and mid-November 1969.

Lasting seven weeks, this journey took the Apollo 11 astronauts around the world.

As recalled by NASA last year, when it celebrated the 50th anniversary of the Moon landing, during the tour the crew “travelled to six continents, crossed the Equator six times, met with Presidents, Prime Ministers, Kings and Queens, and ambassadors, received numerous medals, accolades, and gifts, rode in countless motorcades, and gave 22 press conferences.”

The Queen had the chance to meet Dr Aldrin once again in 2006.

Their encounter took place once again at Buckingham Palace, where the monarch hosted a garden party to mark 50 years of the Duke of Edinburgh’s award.