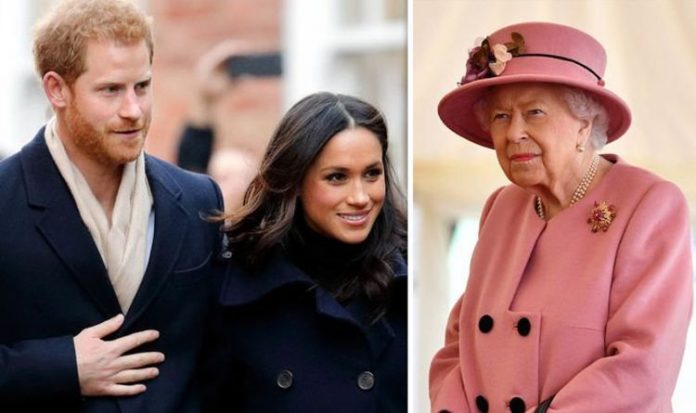 Meghan and Harry will appear in their first sit-down interview since stepping down as senior royals on March 7. The couple has chosen American TV host Oprah to lead the “intimate conversation”, set to delve into a range of issues including how Meghan is handling life under intense public scrutiny and their move to the US.

But the Queen’s former press secretary, Dickie Arbiter, believes the couple will need to be careful when touching upon a few topics – including the media and Meghan’s father Thomas Markle Snr.

Mr Arbiter told Vanity Fair: “The Sussexes have an army of professional well-paid advisors so they will go into the interview well-rehearsed and prepared but they will have to be careful particularly when speaking about their son and Meghan’s father.

“Associated Newspapers will, I imagine, be watching the interview very carefully.

“They want their day in court so I can’t believe Meghan will talk in-depth about the court case and she should be careful when talking about the media because from what I have seen, she hasn’t been harassed by the British media.”

Queen news: A former Queen’s aide issued a warning to Meghan and Harry ahead of their interview with Oprah (Image: GETTY)

Meghan triumphed at the High Court last week when she won her bid to avoid a trial in her privacy case against Associated Newspapers, the publisher of the Mail on Sunday and MailOnline, which in February 2019 printed extracts of a letter she sent to her estranged father.

Mr Justice Warby granted the Duchess a summary judgement in her claim for misuse of private information against the publisher, which saw her winning the case without going to trial.

He also found the publication of these extracts infringed Meghan’s copyright, but said the issue lays on whether the Duchess was the “sole author” of the letter.

To decide “the next steps” in the legal action, he will hold a new hearing next month.

READ MORE: ‘Wish Diana was around’ Nick Ferrari says Harry is ‘so conflicted’

Mr Arbiter believes the focus of the interview with Oprah will ultimately be on Meghan and Harry’s charitable work, their new organisation Archewell Foundation and their life in LA.

He said: “Meghan is very smart and I suspect this is more about getting their message out about what’s next for them and what they are going to do in LA.

“Harry and Meghan aren’t going to make any waves, it’s not worth them upsetting the apple cart.”

Queen news: Meghan opening up on her wellbeing during her royal tour to South Africa (Image: ITV)

Mr Arbiter stated again online his belief Meghan and Harry won’t take their first interview with Oprah as an opportunity to create tensions with the Royal Family.

He wrote on Twitter: “So #HarryandMeghan are to give a tell-all interview with Oprah on prime time TV.

“Tell all? I doubt it. They’re likely to talk about what they want to achieve with their Archewell Foundation, settling in the US and raising a family, and perhaps about their work and contacts in the UK.”

According to US network CBS, the first to broadcast the interview, Oprah will initially speak just with Meghan, who will recall joining the Royal Family, her marriage, her humanitarian work and motherhood.

Harry will later join the pair to speak about their future dreams and hopes for their work and family.

Meghan already opened up about the struggles she was facing as a prominent member of the Royal Family under the public eye in October 2019.

Interviewed by ITV journalist Tom Bradby during the Sussexes’ tour to South Africa, Meghan was asked about the “impact on your physical and mental health of all the pressure that you clearly feel under”.

The Duchess of Sussex replied: “I would say…look any woman, especially when they are pregnant, you are really vulnerable and so that was made really challenging.

“And then when you have a newborn, you know?

Meghan continued speaking about her emotional state, adding “not many people” had checked whether she was truly ok.

Prompted by Mr Bradby to say whether she was “not okay”, Meghan simply said yes.