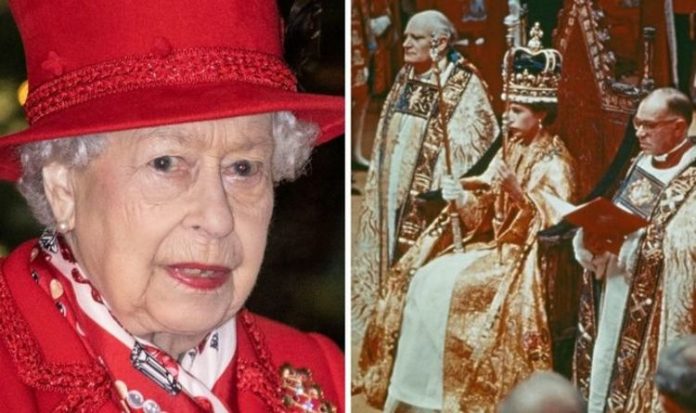 Her Majesty is renowned for being one the most recognisable faces in the world, and is often seen in the UK as a beacon of hope and optimism when the country is at its lowest points. The 94-year-old has prided herself on being an ever present throughout her long reign, which was typified as she welcomed her grandson Prince William, and his wife Kate Middleton, back from their three-day trip across the nation. Joining her were the likes of Prince Charles, Camilla Parker Bowles, Princess Anne and Prince Edward, in a show of unity following their successful visit.

The Queen has continued to try and remain active by carrying out visits during the pandemic but has only been able to attend certain functions due to restrictions.

She has, however, been able to speak to the public via social programmes such as Zoom, meaning her presence has still been felt.

This shift, royal expert Camilla Tominey argues, has also seen a move in the public’s opinion towards the Royal Family at a time when controversy has never been far away.

She said: “It’s interesting to see how the Queen has adapted to her new role, which has had to be effectively virtual.

“This is a woman who throughout her whole reign her motto has been, ‘I need to be seen to be believed’.

“That is why the Queen wears bright colours, why if it’s raining she’ll carry a transparent umbrella because she’s always been of the theory that if people are coming to see her it might be the first and last time in their lives they do so.”

That desire to ensure the public can see her is why, Ms Tominey explained, the coronavirus pandemic has been “difficult for her to manage”, as she would normally meet the public while out on duties.

The Queen has used programmes such as Zoom to keep in contact with the public (Image: GETTY)

Her ability, however, to move effortlessly away from her publicly seen role, and into a more technological sphere, has gone “some way to restore faith in the monarchy”.

Ms Tominey continued: “It’s that keep calm and carry on mentality that the Queen epitomises, it is the stuff of t-shirts, this is why she is renowned as Elizabeth the Stalwart, Elizabeth the Consistent.

“She’s always put duty first and so when it comes to times of crisis we expect her to step up to the plate and have this stabilising, calming effect on the nation.”

DON’T MISS:
Queen worries about ‘heavy fines’ when travelling by the Royal Train [INSIGHT]
Queen’s Royal Christmas Message will be ‘very different’ this year  [ANALYSIS]
Royal Family LIVE: Meghan and Harry to be seen ‘in a different way’ [BLOG]

The Queen uses see-through umbrellas so the public can still spot her (Image: GETTY)

She added in a Telegraph YouTube video this year: “I also think what’s been interesting is if you look at Captain Sir Tom Moore, or the Queen’s conduct through this, actually we have looked to elderly statesmen and women, for comfort.”

Although the Firm has faced challenges throughout the past 12 months, including the controversy surrounding Prince Andrew’s friendship with paedophile Jeffrey Epstein, and Prince Harry and Meghan Markle’s exit from senior duties, there have been moments of celebration.

The Queen: Her bright clothes also help her get spotted (Image: GETTY)

In secret, the Queen’s granddaughter Princess Beatrice wed, while two other of her granddaughters, Princess Eugenie and Zara Tindall, have announced they are expecting babies next year.

But unfortunately for the Firm, they will be unable to all meet up together – as is tradition – this year at the Queen’s Sandringham estate due to Covid-19.

It was previously suggested Charles could still see Her Majesty as part of the annual Boxing Day hunt this year as the Government’s coronavirus restrictions permits the meeting of up to 30 people carrying out “professional outdoor sport”.

The guidance would allow Charles to see the Royal Family at Sandringham for pheasant hunting without restrictions.

But the Buckingham Palace statement confirmed that no royals will gather at Sandringham Estate for Boxing Day.

The spokesperson added: “Having considered all the appropriate advice, the Queen and the Duke of Edinburgh have decided that this year they will spend Christmas quietly in Windsor.”