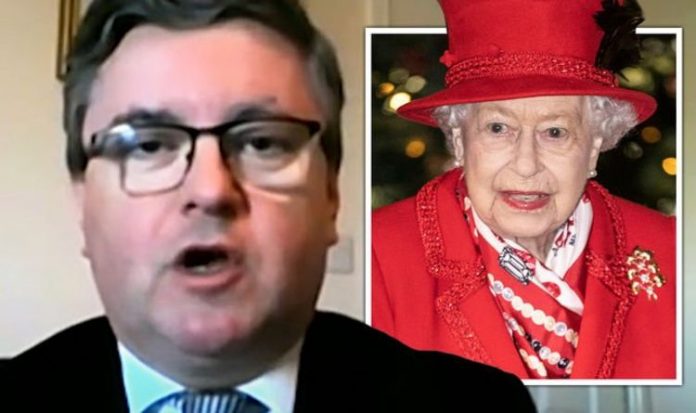 Robert Buckland told Good Morning Britain’s Kate Garraway that the Queen has issued a message of national unity. The Justice Secretary added that Queen Elizabeth II has got it right for 70 years and continues not to put a foot wrong.

Ms Garraway said: “Constitutionally the Queen does not get involved in politics.

“I wonder whether if she was saying something contrary to what you want whether you would be so welcoming?”

Mr Buckland replied: “I think we can trust the Queen to get it right.

“An issue like the vaccine and indeed the Covid pandemic goes beyond politics.

“This is something that affects all of us, whoever we are and whatever walk of life we come from.

“Messages of unity are very much part of what the Queen is all about.

“I have utter faith in the ability of the Queen to do that, she has got it right for nearly 70 years and she continues not to put a foot wrong.”

Earlier this week, the monarch opened up on her coronavirus vaccine experience.

The Queen said: “Well, as far as I can make out it was quite harmless.

“It was very quick, and I’ve had lots of letters from people who’ve been very surprised by how easy it was to get the vaccine.

Dr Emily Lawson told the Queen: “We hope everyone who is offered the vaccine will take it up, because it is … all of our best chances to protect both the people who take up the vaccine, their families and their communities.”

The monarch said: “Once you’ve had the vaccine you have a feeling of, you know, you’re protected, which is I think very important.

“I think the other thing is, that it is obviously difficult for people if they’ve never had a vaccine.

“But they ought to think about other people rather than themselves.”

She added: “I think it is remarkable how quickly the whole thing has been done and so many people have had the vaccine already.”