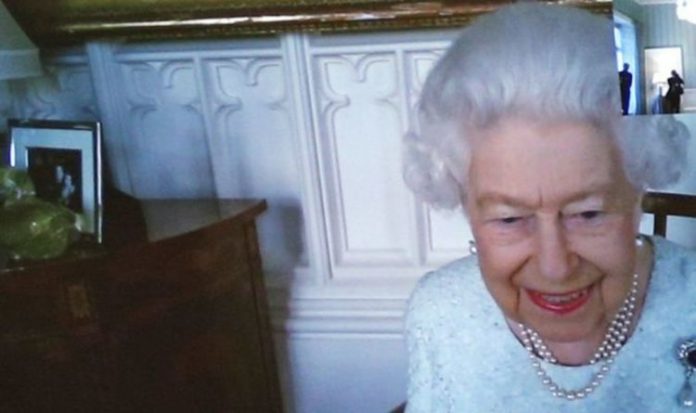 The Queen marked yet another royal first last week when she carried out her diplomatic audiences via video link. During the memorable set of engagements, the Queen was photographed by her staff, allowing royal fans to be able to see her work from home set-up.

In one of the pictures released by Buckingham Palace following the video calls with diplomats, eagle-eyed royal watchers have noticed a framed black-and-white picture positioned behind the Queen.

While the details of the portrait are impossible to see from the distance, the picture appears to be representing Prince George, Princess Charlotte and Prince Louis, Hello! magazine wrote.

In the snap, Prince George and Princess Charlotte seem to be located behind their younger brother Prince Louis.

Since the beginning of the coronavirus pandemic, the Queen has embraced technology and allowed royal fans to step into her home in Berkshire in a new way.

During the first national lockdown, the monarch carried out her first-ever royal visit via video conference call with a few members of the Carers Trust.

The Queen was virtually accompanied by her daughter Princess Anne, who from her home in Gloucestershire helped Her Majesty ease in the engagement.

The Queen has since carried out a number of video calls as she continues to self-isolate at Windsor Castle.

READ MORE: Queen and Prince Philip will not reveal when they have COVID-19 jab

In late November, the monarch enjoyed the performance of a 45-strong Cypriot children’s orchestra to mark her 73rd wedding anniversary to Prince Philip.

During the same call, the Queen also spoke to three winners of the Commonwealth Points of Light award.

During her first set of virtual diplomatic audiences on December 4, the monarch received three delegates, the Court Circular states.

The register recording every official engagement carried out by the Royal Family during the year, read: “Her Excellency Ms. Sophie Katsarava was received in audience by The Queen via video link today and presented the Letters of Recall of her predecessor and her own Letters of Credence as Ambassador from Georgia to the Court of St. James’s.

“His Excellency Mr. Gil da Costa was received in audience by Her Majesty via video link and presented the Letters of Recall of his predecessor and his own Letters of Credence as Ambassador from the Democratic Republic of Timor-Leste to the Court of St. James’s.

“His Excellency Dr. Ferenc Kumin was received in audience by The Queen via video link and presented the Letters of Recall of his predecessor and his own Letters of Credence as Ambassador from Hungary to the Court of St. James’s.

“Mrs. Kumin was also received by Her Majesty via video link.

The Letters of Credence are also known as these diplomats’ credentials.

They are an official document written by the diplomat’s Head of State to the Queen in which they request she gives credence to the new appointment.

The Queen usually holds these audiences at Buckingham Palace.

However, the monarch left her London home on March 19 and is unlikely to return until the end of the pandemic.

While at Windsor Castle, the Queen has also continued to hold weekly meetings with the Prime Minister, Boris Johnson, over the phone.