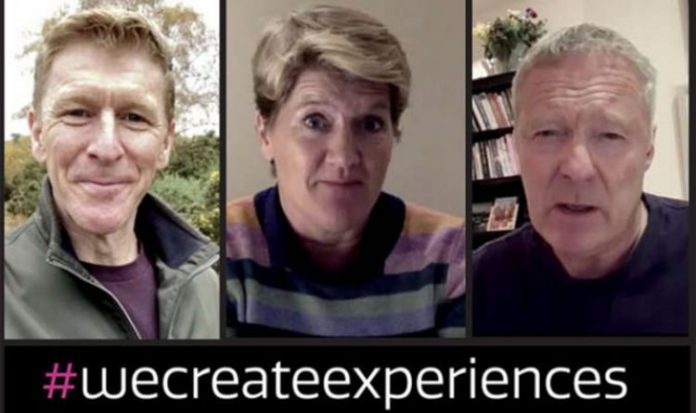 Also in the “One Industry One Voice” coalition is Olympic champion Daley Thompson, chefs Angela Hartnett and Tom Kerridge, ex-racing driver David Coulthard and businessman Harvey Goldsmith. They all appear in a video called #wecreateexperiences as part of the push. The campaign wants venues such as Wembley, Olympia, Manchester Arena and Birmingham’s NEC, as well as smaller sites, to reopen their doors for spectacular shows and business conferences.

Because major events can take around six months to plan, by starting now the performances, seminars and others will be ready for when most of the country has been vaccinated and the pandemic is behind us.

The events will also provide much-needed work for up to 1½ million people in the sector who have been laid off during the coronavirus crisis.

Campaign co-founder Simon Hughes said that it will remind Britons that events keep the nation excited and inspired and contribute a fortune to the economy.

He added: “The events industry is ready to get back to work and to play its part in rebooting the economy.

“We are known internationally for our world-leading safety standards, so we can be trusted to stage safe events that will help businesses grow and showcase their work.”

He said events and exhibitions would also help charities generate income and allow people to rediscover “the real, rather than the virtual world”.

The campaign will begin by trying to coax wary conference organisers into planning their comeback.

It will also launch with results of the biggest-ever survey of events businesses and professionals working in the arts, music, sports, corporate events and charity sectors.

The poll reveals that eight in 10 lost more than 60 percent of their turnover while 83 percent reported suffering from stress and anxiety during the pandemic.

Business leaders also said that 96 percent of events add value to their enterprise, while 93 percent said their absence damaged had their operation.

A campaign spokesman said: “We want to raise awareness of the unique power of events to educate, inspire, celebrate, support society and add value.

“The first phase is targeted at the business community, urging them to deliver trade shows, conferences, product launches, charity fundraisers and other live events as they are given the green light to resume.

“It will educate decision makers about the economic impact of live events and assure them they can be staged safely.”