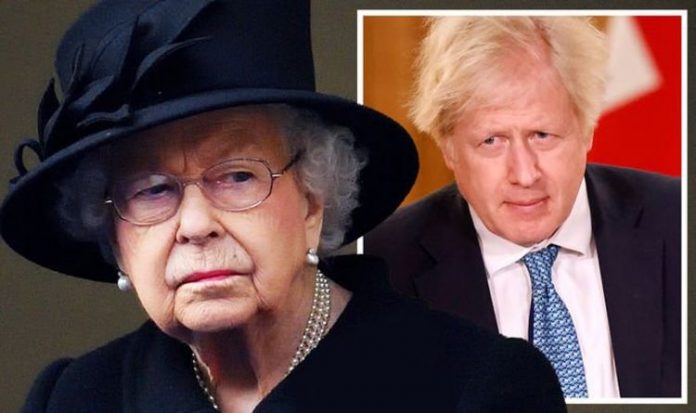 The Queen and Duke of Edinburgh have received their Covid-19 vaccinations, joining more than a million people who have been given the jab but news of them doing so sparked fury in the Palace. Royal commentator Richard Eden revealed that there was a backlash at Buckingham Palace as the Queen felt “bullied” to give out medical information by Boris Johnson’s Government briefings. It is understood the Queen decided the information should be made public to prevent inaccuracies and further speculation.

Mr Eden told Palace Confidential on MailPlus: “A month or two before Christmas, we had a lot of stories appear about how the Queen and Prince Philip would get the vaccine.

“Apparently that caused a bit of a backlash at the palace.

“They didn’t like the suggestion, the briefing that was coming from the Government, that they were being pushed or bullied into releasing medical details.

“There does seem to have been a bit of a backlash for that as well.

READ MORE: Meghan and Harry ‘not going’ to Megxit review

“The subject is really intriguing and controversial.”

Royal biographer Angela Levin added: “I think their lives have been in the public eye for so long, so many decades that I think they’re quite entitled to keep this to themselves.

“It’s not our business, really. We’re all got to make up our own minds with these things.”

The Queen and Philip have been spending lockdown sheltering at their Windsor Castle home, and had a quiet Christmas at the Berkshire residence after deciding to forgo the traditional royal family gathering at Sandringham.

Charles was described as having mild symptoms and lost his sense of taste and smell for a period, while it was reported his son William was hit “pretty hard” by the virus.

On a visit to a vaccination centre at Gloucestershire Royal Hospital before Christmas, Charles said he is “way down the list” for an inoculation.

On Friday, a third coronavirus vaccine was approved for use in the UK as the country recorded the highest number of Covid-19 deaths on a single day – 1,325 people.

The latest jab, from US biotech firm Moderna, has been given the green light by the Medicines and Healthcare products Regulatory Agency – joining the vaccines from Pfizer/BioNTech and Oxford/AstraZeneca which are already being used in the UK.