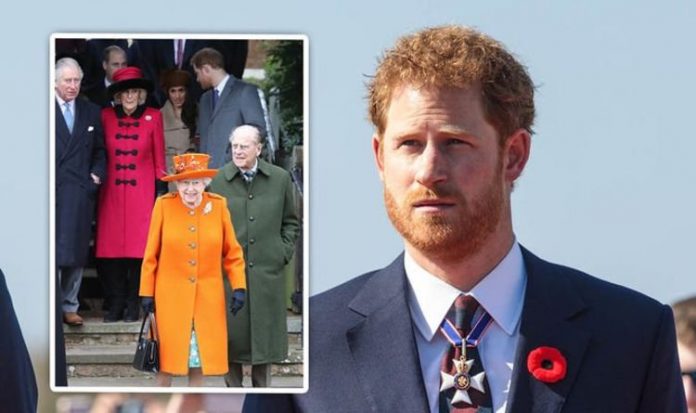 Claims Prince Harry is hastily returning to the UK have been dismissed by a source, who said the Duke of Sussex has no intention to cross the pond before Christmas. The source told Vanity Fair: “Global travel has been made very complicated by the coronavirus pandemic and at the moment the Duke has no plans to travel back to the UK, certainly not before Christmas.

This means Prince Harry will spend Christmas away from Sandringham, the Queen and the Royal Family for another year.

In 2019, the Sussexes decided to take a six-week break between mid-November and January and celebrated Christmas privately in British Columbia, Canada.

The Duke and Duchess of Sussex marked the festive season by sharing a black-and-white e-card depicting the family-of-three gathered under a Christmas tree.

Despite the distance from his homeland made worse by coronavirus-induced travel restrictions, the Duke of Sussex is said to be excited to have an “American Christmas”.

Royal expert Katie Nicholl wrote in Vanity Fair: “Harry and Meghan are said to be looking forward to spending their first American Christmas together in their new Montecito home.”

The Duke and Duchess of Sussex are expected to travel back to the UK in early January, on time to attend Meghan’s High Court case against Associated Newspapers.

The trial starting on January 11 is set to last between eight to 10 days and at the moment is still planned to be carried out in person rather than virtually.

As under the current guidelines, people entering the UK from the US are expected to quarantine for 14 days, Meghan and Harry are likely to be planning to spend New Year’s Eve in England.

A source told Newsweek: “Had it not been for COVID and travel restrictions, they would have already been back in the UK — for things like Beatrice’s wedding and Trooping of the Colour for example.

“It is worth also pointing out, that the trial date for the Mail on Sunday is set to start on January 11 at the High Court, London, which if nothing changes, will still require two week’s self-isolation before it starts.”

Meghan and Prince Harry are pencilled in to travel back to the UK for at least another special occasion in 2021.

On July 1 next year, the pair are expected to join Prince William and Kate for the unveiling of the statue of Princess Diana at Kensington Palace.

The statue will be placed where the Duke and Duchess of Sussex announced their engagement to the world, in the gardens of the palace.

Prince Harry was tipped to be returning in the UK within days after a source claimed staff at Frogmore Cottage, the Sussexes’ base in Windsor, were told to get ready.

They told : “Staff at Windsor have been told to prepare for the possibility Harry could come back.

Meghan and Prince Harry moved from British Columbia to Los Angeles in late March, a few days before they officially stood down as senior royals.

The Sussexes temporarily stayed at the home of producer Tyler Perry.

In early July, after buying their first home in California, they moved in a mansion in an exclusive area of Santa Barbara, Montecito.

There Meghan and Harry have said during multiple video appearances their son Archie can play outside and enjoy fresh air despite the self-distancing measures still in place in California.