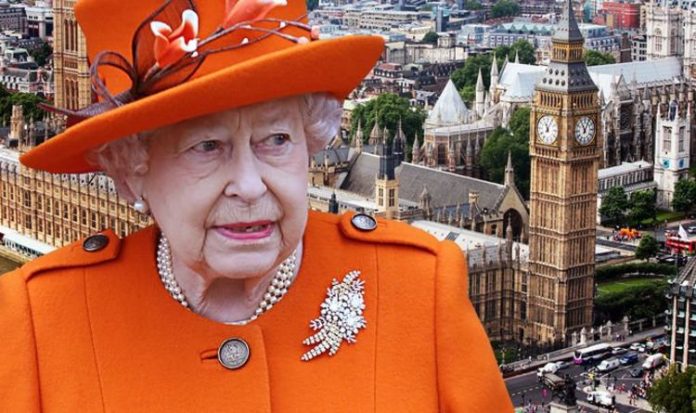 Mr Scobie said: “We have had the news confirmed by the Sunday Times that Queen Elizabeth II will reportedly not be returning to Buckingham Palace this year due to the pandemic.

“She is currently on her annual stay in Balmoral in Scotland with Prince Philip after which they will return to Windsor Castle instead of Buckingham Palace.

“A source told the paper that this will be her longest absence from Buckingham Palace in a decade.

“Windsor will be her base for the foreseeable future, until the threat from coronavirus has lifted.

“Buckingham Palace is undergoing a number of renovations at the moment so I would imagine this also gives an opportunity for construction to continue throughout the Palace and get it finished a little bit quicker than the due date we were expecting.”

The footage from a ‘Freedom For The Children Global Walk London’ protest showed a group of people outside the Palace last Saturday.

The footage has been viewed by more than three million people since it was posted on Twitter.

The Facebook post said: “The purpose of this walk for change is to bring awareness to the current reality of child exploitation within our own communities and around the world.

“Let’s show our devotion and determination toward protecting these children, our communities most vulnerable, by requesting change and reformation within our government and law enforcement agencies to ensure that justice is brought in such a manner that it will significantly reduce instances of child exploitation while promoting awareness in order to end this ongoing issue.”

One protester wrote on Twitter: “I was there. It was a peaceful walk followed by a group meditation starting at the London Eye on to the Palace then to Downing Street.

“Organised by ‘Freedom For The Children’ FB group for #EndChildTrafficking We had full police support.”