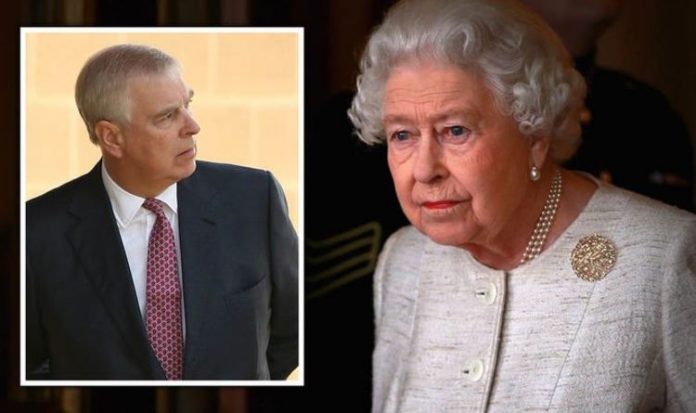 Queen reached ‘end of her tether’ with Margaret claims expert

The Royal Family Twitter account, which represents the Queen and other senior royals who don’t have a personal account, has shared a tweet marking the birth of Prince Andrew 61 years ago. The birthdays of senior members of the Royal Family are usually marked with a cheerful message and a picture of the royal turning one year older.

However, with today’s post Buckingham Palace appears to have shifted the focus from Prince Andrew to the Queen and how his birth marked a rare milestone in royal history.

The tweet read: “#OnThisDay in 1960 The Queen was safely delivered of a son, the first child born to a reigning Monarch since 1857.”

The tweet also described the two pictures included in the message, none of which show Prince Andrew in recent years, saying: “Her Majesty is pictured holding Prince Andrew in 1961 on the balcony of Buckingham Palace, alongside The Duke of Edinburgh, Princess Anne and The Queen Mother.”

Despite the tweet not directly addressing Prince Andrew and his birthday, a few royal fans expressed their criticism other the Royal Family’s choice to mark the day.

Another added: “NO SHAME”.

And a third said: “I genuinely can’t believe the Royal Family have tweeted this, have they no shame?!”

Another royal fan wrote: “Ah, reading the room not your strong point then?”

Other Twitter users noted how the Royal Family account did not directly address the 61st birthday of Prince Andrew.

Queen news: Prince Andrew and the Queen heading to church in Sandringham in January 2020 (Image: GETTY)

However, a few social media users defended the decision to mark Andrew’s birthday.

“He may have stepped back from official duties in 2019, but he’s still the Queen’s son – rumoured to be her ‘favourite’ son.”

Queen news: Prince Andrew was born on this day in 1960 (Image: GETTY)

And another, replying to one of the users saying to be disappointed by the royals’ tweet, wrote: “Why? It’s still her child”.

And others simply wished Prince Andrew a happy birthday.

One wrote: “Many Happy Birthday to HRH @TheDukeOfYork, Prince Andrew!”

Queen news: Prince Andrew follows Archie in the line of succession to the throne (Image: EXPRESS)

Last year, the Royal Family Twitter account was hit by criticism after sharing a birthday message dedicated to Prince Andrew upon his 60th birthday.

The message read: “On this day in 1960, Prince Andrew was born at Buckingham Palace, the first child born to a reigning monarch for 103 years. Happy Birthday to The Duke of York.”

The Duke of York is currently eighth in the line of the succession to the throne.

Prince Andrew, who has focused much of his royal work on entrepreneurship, announced in November 2019 he would temporary step back from public duties in the wake of his car crash interview with Newsnight’s Emily Maitlis.

Queen news: The Queen and Prince Andrew in the early 1970s (Image: GETTY)

The interview focused on his association with convicted sex offender Jeffrey Epstein.

After the 45-minute-long grilling aired, the Duke was criticised by the public and was accused of not clearly expressing sympathy for Epstein’s victims and saying he did not regret his relationship with the former financier because “the people that I met and the opportunities that I was given to learn either by him or because of him were actually very useful.”

During the interview, Prince Andrew also wholly denied any allegations made by Virginia Roberts-Giuffre.

The Duke of York has been spotted in public only a handful of time since November 2019 – including in January 2020 when he accompanied the Queen to church in Sandringham.

He has yet to make an appearance at an official royal event.