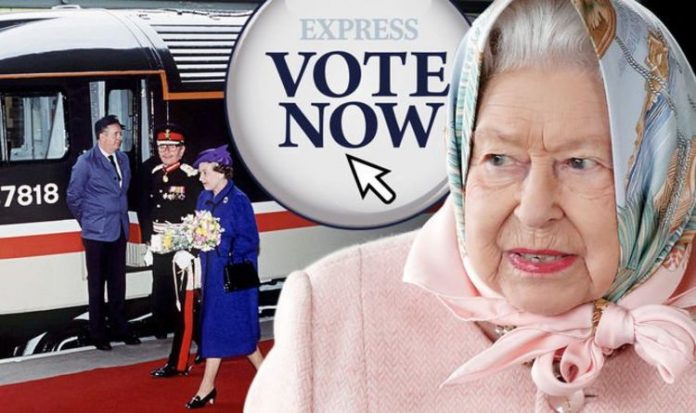 The latest accounts of the Royal Family’s spending show the Queen will receive a £85.9million Sovereign Grant next year. It comes after the figures showed there will be a £15million shortfall over the next three years, due to COVID-19. A £369million re-servicing programme is also needed to update the electrical cabling, plumbing and heating at Buckingham Palace over 10 years was also expected to be £20million short.

How is Boris Johnson handling the coronavirus crisis? Let us know!

The review also revealed that a mere three trips were taken on the royal train last year at a cost of more than £63,000.

The only two members of the Royal Family allowed to use the train are the Queen and her first born son Prince Charles.

Charles travelled from his home in Gloucestershire to Carlisle for while carrying out royal visits.

Queen news: Should the Queen lose her train after only using it three times in 2019? (Image: GETTY)

He also used the train to visit Wales, which added a further cost of £19,737.

Meanwhile, the Queen only used the train once in the last year.

She travelled from from London to Edinburgh, where she then spent a week staying at the Palace of Holyroodhouse.

The royal train is usually used by the pair around ten to 14 times each year.

Buckingham Palace has said the train provides a safe way to travel overnight.

The train also helps keep further security costs down, according to the palace.

Sir Michael Stevens, Keeper of the Privy Purse, added the royal household had no intention of asking for extra funding following the predicted shortfall.

He said: “So in our forecasts we are now estimating that this reduced growth in the Sovereign Grant means the likely contribution from the Sovereign Grant to the re-servicing programme will be over £20million short of the agreed £369million ten-year budget.

The Royal Train is often cited as the most secure way for the Queen to travel (Image: GETTY)

“We are expecting a significant reduction in income from the Royal Collection Trust, due to the impact COVID-19 has had on their visitor numbers.

“This forms the bulk of a projected shortfall in income which we estimate will be around £5million per year for the next three years.”

He added: “In responding to both these financial challenges we have no intention of asking for extra funding and will look to manage the impact through our own efforts and efficiencies.”

The annual review also revealed the most expensive official overseas trip was the Sussexes’ tour to southern Africa in October last year.

Queen news: The Queen only used the train once in the last year. (Image: GETTY)

Meghan Markle and Prince Harry also paid an undisclosed sum upfront for the rental and refurbishment of Frogmore Cottage.

They faced pressure earlier in the year to pay back the £2.4million spent renovating the home they lived in after they first got married.

A senior palace source said: “The Duke and Duchess of Sussex have made a substantial contribution to the Sovereign Grant that covers refurbishment and rental obligations for Frogmore Cottage.

Her Majesty used the train to travel to her palace in Scotland (Image: GETTY)

“The reporting method for this contribution has yet to be determined and will have to be agreed by the National Audit Office before appearing in next year’s accounts.”

But Graham Smith, chief executive of Republic, the anti-monarchy organisation, called for a review of Harry and Meghan’s financial dealings with Frogmore, which is owned by the Crown Estate and was a gift from the Queen.

“I think the Crown Estate has questions to answer about allowing the royals to use the property in this way, and why they are not more open about the financial transactions that go on in relation to the houses they let the royals have.”